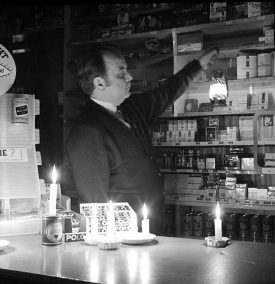 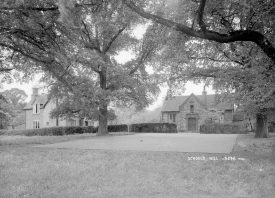 I was intrigued by accounts of candle auctions in the Rugby Advertiser.

A candle auction at Leamington Hastings in 1912

Fourteen acres of winter keeping, the property of the Charity Trustees, was let in the School … till March 25th next. A pin was stuck into a candle, and the last to bid before it dropped was to be declared the purchased [sic]. This proved to be Mr Buttery, with a bid of £5. 1

The Toast and Ale Night in Swinford

Another article described a candle auction held annually until around 1895 at the Chequer’s Inn, Swinford, on the evening of St Thomas’ Day – December 21st. During the evening the Town Close was let by an auction similar to that described above; the highest bidder before the pin dropped becoming the tenant for the year. This was claimed to be a link back to the Middle Ages. And yes I do know Swinford is just outside Warwickshire, but it was reported in the Rugby Advertiser and the celebration sounds fun.

Afterwards the company spent a convivial evening priming themselves with hot spiced ale, in which floated toasted cheese, and drank out of a common bowl … the miserable substitute for the above happy annual reunion is a letting by tender.2

Another article, written in 1909, stated that selling by candle had been common a hundred years or so previously. The local surveyor would light a candle that had pins stuck in it every half-inch. Bidding started and as the wax melted a pin dropped and the lot went to the last bidder. This continued until all the lots had been sold. The author asserted that there were still a few villages in remote parts of the country where this custom continued.3

What is the history of Candle Auctions?

I was puzzled by all this and investigated. According to Wikipedia candle auctions were popular in the 17th and 18th centuries.  A candle was lit, and the last bid before the flame went out was the winner. Clearly the aim was to raise the price by encouraging bidders to keep going as they didn’t know exactly when the auction would finish. Samuel Pepys in his diaries describes the Admiralty selling off surplus ships by this method in the 1660s. A few candle auctions are still held today with pieces of land being let in Somerset and Dorset, though it sounds as though they are the candle flame type of auction. I have not yet been able to find mention of the ‘pin in candle’ type of auction described in the ‘Rugby Advertiser’.

Does anyone know of other candle auctions locally?

And finally – a much slower version of the same sort of thing occurs in Alaska where a tripod attached to a clock is frozen into the Tanana River and locals take bets on when it will first move as the ice melts in the spring, the money raised going to charity.