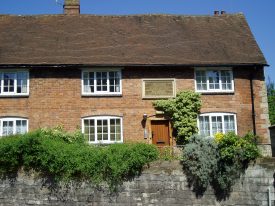 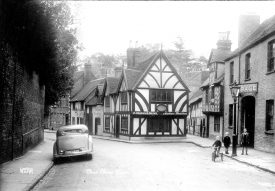 The almshouses were founded in the 1570s by Thomas Oken, who has been called ‘Warwick’s most famous son’. He was a silk merchant – a self-made man without children who left his fortune to good causes. There was an unseemly wrangle over his deathbed and afterwards as various people tried to get their hands on his money, but fortunately the good causes eventually benefitted.1

The original almshouses were three timber-framed cottages in Pebble Lane (now Old Square, outside St Mary’s Church). The houses were not purpose built, and the original tenants were allowed to remain there during their lifetime. The timber-framed cottages were destroyed in the Great Fire of Warwick at the end of the 17th century and were valued at £60 in the claims made for compensation afterwards. 2 I have also shared a photo, that is of another house owned by Oken that still survives.

The almshouses were originally intended for married couples (or two people sharing) but in 1586 a survey of the poor of Warwick only listed women living there.3 The almspeople lived rent-free, and originally got an income of six pence a week. They were required to pray daily for the Monarch. They were given a garment every three years, made of black cloth with Oken’s initials ‘TO’ in white on them. However, by the 19th century this had been transformed into a rather more useful drapery ticket to buy clothes.

After the great fire, the trustees prudently rebuilt in brick, six units for twelve people, adjacent to Eyffler’s almshouses in Castle Hill.  They were built in a similar style, so the whole forms a pleasing terrace standing up above the road, opposite the castle. Both sets of almshouses have been restored and modernised over the years; they now house fewer people in bigger units with modern conveniences.4

Most of the residents of the old almshouses were described as ‘ympotent’ (that meant disabled then – not what we might think nowadays). One woman was blind, and said to be 100 years old; another was ‘nere a 100’ years old (though we should probably take this with a pinch of salt in the days before birth certificates). Almshouse residents in 1851 included a 70-year old widow, who was a ‘hawker of stockings’ and a married ‘hostler’ (a groom or stable hand).5 There were also out-pensioners supported by the charity but living elsewhere in the town.

There’s a plaque on the front of the Oken almshouses inscribed:

Whereas three Alms Houses standing in Pebble lane in Warwick which Received 6 Poor Persons given by Mr THOMAS OKEN were burnt by the Dreadful Fire upon the 5th Day of September 1694 these Alms Houses to receive 12 persons, were by the charity of the said Thomas Oken Built upon the Ground given by Mr Nick. Iffeler Deceased to the same charitable Office, by the Feoffees of the said charity upon the 20th day of May Anno. Dom. 1696.References

1 P. Bolitho ‘Warwick’s most famous son: the story of Thomas Oken and his Charity’ Warwick, 2003.