You are here: Home>Locations>Mancetter>Mancetter Almshouses 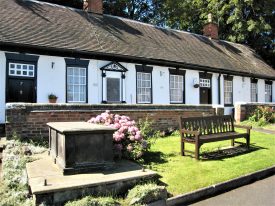 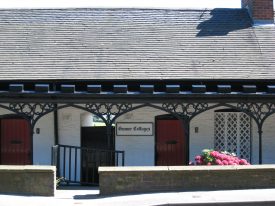 There are two sets of almshouses in Mancetter.

These were founded by James Cramer, a local man who made his fortune in London as a goldsmith. The building was erected in the 18th century beside the churchyard. It was intended for six men over the age of 60 who were poor, honest and good churchmen: they were required to attend prayers on Sundays and holy days if they were well enough. They were given an allowance of 5s a week (raised to 7s in 1822) and not allowed to beg, on pain of eviction. The men had to be local – from Mancetter or Atherstone. 1

The inscription on the plaque in the centre of the building reads: ‘These Almshouses with An Endowment of Two Thousand Pounds were the Sole Gift of James Cramer Esq. Late Citizen & Goldsmith of London.  And Native of this Place.  Built Ann. Dom. 1728.  He likewise Gave Ten Pounds A Year to ye Poor of Atherstone for Ever.’ Below it continues: ‘These almshouses were renovated through the generosity of Baron Davenport’s Charity Trust and the Almshouse Association in 1990-1991.’

Cramer’s endowment was clearly generous and enabled the erection of a second set of almshouses on the other side of Mancetter Road in 1822. These have a charming iron-work verandah. They originally provided a home for five poor old men, but by 1901 a matron had been appointed who lived in one of the units; nursing and medical attention were provided as needed. 2