You are here: Home>Locations>Warwick>Oken’s House Survey 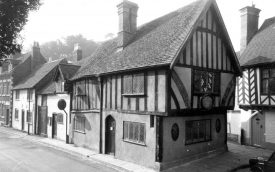 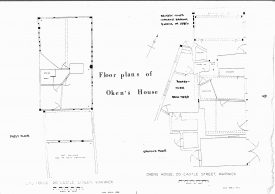 Timber framed buildings are subject to many alterations over the centuries and Oken’s House is no exception. Nevertheless, there were fascinating survivals from the past uncovered by this survey.

A study of the structure of this property, carried out with the co-operation of the County Museum when the building was being modernised, shows that, rather than being one house with an attached garage, it is, in fact, two dwellings.

The main property which faces up Castle Street has a jettied north end with strong paired ‘down’ braces at the first floor. It originally consisted of two bays, and the dividing crossframe can be seen on the staircase and in the roof. The external framing on both sides and in the north gable has the appearance of being close-studded, but careful analysis shows that this is not original. The side walls were built with large panels and gently curved braces in each upper corner, with a single relatively small window in each panel.

Internally, there is very little of the original structure left, with new bridging beams and supporting posts on the ground floor, as well as an entirely new roof over the north bay. The roof over the south bay is probably eighteenth century in date.

In the south bay, access to the next building is by ducking under the adjoining tie-beams of the two buildings. There is, however, a former doorway which has its doorhead carved into the tie-beam of the main building. Presumably, this dates from when the two buildings were united.

The second dwelling is smaller and lower than the main building but also consists of two bays. The part which formed the Dolls’ Museum itself was always two storeys, with the upper floor having a ceiling at collar level – as still exists. The other bay, which now has garage doors in it, has an inserted first floor and this bay was, in fact, an open hall. The evidence for this includes the fact that the crossframe between the two bays, as well as the roof and other parts of the original structure exposed at first floor level, has smoke blackening and sooting which continues into the other bay above the collar.

The two structures were, therefore, both open hall houses and the details of the framing suggests that the second, smaller, dwelling probably dates from the early 15th century while the main house dates from the late 15th or early 16th century.

This article was originally published in the Friends of the Warwickshire County Record Office Newsletter, November 1988, and is reproduced with their permission.

Linkedin
More from Warwick
More from Semi and Detached