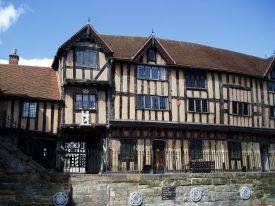 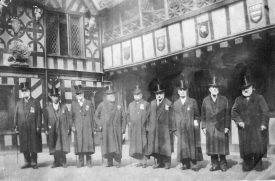 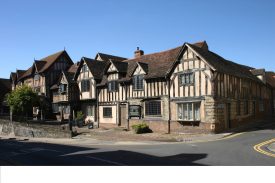 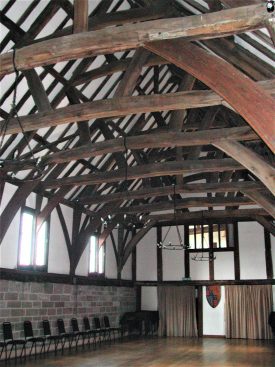 This famous Hospital was founded by Robert Dudley, Earl of Leicester, a favourite of Queen Elizabeth the First (who gave him Kenilworth Castle). The magnificent buildings were in fact not built for the purpose, but acquired from Warwickshire Corporation. During the Reformation, Thomas Oken had endeavoured to keep the property of the Guild of the Holy Trinity and St George out of the hands of the Crown by transferring it to the King Henry VIIIth Trust (which seemed a clever move at the time). However, the Earl of Leicester commandeered the premises to be used as a home for old soldiers and their wives.

The splendid timber-framed complex dates from the late 14th to early 15th century and surrounds a galleried courtyard, with coats of arms and heraldic devices: Lord Leycester’s bear and ragged staff and the Sidney family porcupine. Upstairs is a magnificent room with a fine oak table that had been the Guildhall. It was divided up by partitions to make cubicles for the original soldiers (like stalls in a stable). However, Mrs Raphael found this splendid room was being used for storing coal and washing clothes in the 1920s, by which time the brethren had individual rooms.1

The hospital had communal facilities: a kitchen – now a restaurant – and a chapel, where daily prayers are still said. Later on, the Anchor Inn next door was added – famous as the probable starting place of the Great Fire of 1694. Thank goodness the wind was from the west, which saved the wooden premises from destruction. The hospital is deservedly a Grade I listed building.

Warwickshire County Record Office holds some interesting documents relating to the hospital. Ordinances were made in 1585 when Thomas Cartwright, a Puritan scholar, was invited to become Master. The ordinances were clearly intended to support low-church doctrine, and included the daily prayers to be said in the house. The founder clearly took a particular interest in this because he annotated the ordinances with advice about the prayers in his own hand and signed it ‘R. Leycester’.2

A document was sent to ‘our Almshouse in the towne of Warwick’ from Queen Elizabeth I at ‘our manour of Grenewhiche’ requesting a place in the Hospital for Richard Deersham for ‘his faithful service in the wars where he received his many hurtes and maymes’.4

The life of the community

The residents had strips of garden at the back, which have now been converted into a splendid garden that includes a gazebo, a pineapple pit and an Egyptian nilometer. The master has a fine house and garden, and leads the community.

Rooms such as the great hall are used for concerts, plays, lectures etc. and the site has appeared to great effect in films and TV programmes. The hospital is normally open to the public; residents admit visitors and wear their gowns and top hats on ceremonial occasions.

This article is based in part on material from exhibitions presented by Warwickshire County Record Office staff.

Linkedin
More from Warwick
More from Almshouses and Charity