You are here: Home>Locations>Brandon>Brandon Mill 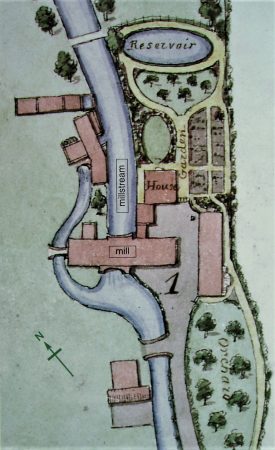 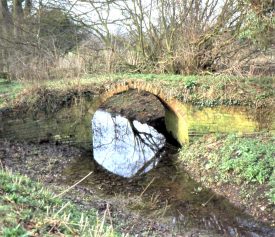 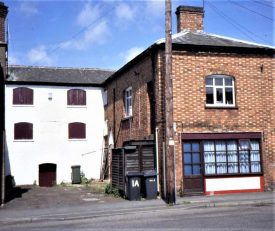 A water mill used to stand on a mill-stream off the river Avon between Brandon and Ryton on Dunsmore; it was situated on what is now the eleventh green of Brandon Wood Golf Course. The earliest record of this mill is a map from 1630 showing ‘Mr Wilcoxes Mill’ and it was probably built in the 17th century as a mill for fulling cloth in connection with the textile industry in nearby Coventry.1

By 1743 the mill had been adapted for paper making, using hammers powered by an overshot water wheel. Later in the 18th century a house was added to the mill with an orchard and garden; this is recorded in a beautiful estate map created in 1792 for a sale after the owner of the paper mill went bankrupt.2 A few trees from this garden still survive, alongside the millstream and a little footbridge.

In the early 19th century, the mill was adapted again for silk throwing: a process that turns raw silk into threads strong enough to be woven. It employed well over 100 people from surrounding villages (Wolston, Brinklow, Ryton on Dunsmore and Stretton on Dunsmore) including children as young as eight. At that time, many children were employed in such factories, often in appalling conditions. This caused considerable problems for local schoolmasters:

Placed the matter in the hands of the Factory Inspector…he sent their parents a strong letter & ordered them to send their children to school half-time.3

The silk industry suffered periodic slumps and the property was sold in 1867; the sale particulars mention a row of small cottages nearby that had been erected for workers, and give helpful details of the silk-throwing machinery in the mill.4 A delightful inventory survives that lists the contents of the house down to the knives and forks, sheets and mattresses.5 Details in this inventory suggest that the property was being used as a farm and brewery at that time.

The mill was restored as a silk-throwing mill that thrived for a while; I was told about a woman who used to escort a group of children from Wolston to work there. The mill owner – Mr Iliffe – opened another silk mill in Brinklow that operated for about ten years and this building still survives today (though now converted into housing). However, the continued decline of the silk industry in Coventry caused the final demise of Brandon mill by the end of the 19th century. The site was disused in 1905, and deteriorated into a ruin in the 20th century.

It was forbidden territory to paddle over to the Mill grounds [from Ryton]. I did however venture over with other lads from the village some years later. It was truly a mysterious and dangerous place. No place for little boys!6

The records cared for by Warwickshire County Record Office enable us to discover much of the history of this interesting site, in spite of the fact that little remains above ground. If you would like to know more, the record office sells a booklet about Brandon silk mill.7