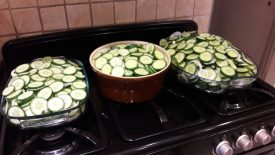 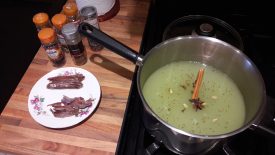 Ready to boil the mixture.
Image courtesy of Karen Moulder 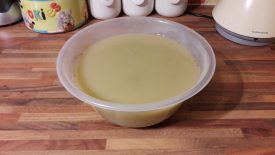 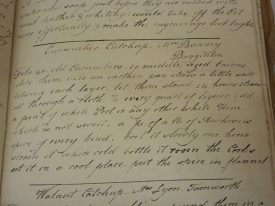 This recipe, which was kindly chosen for me, is from a recipe book in the Eleanor Archer collection1. Although the book itself is believed to have belonged to her mother, Susannah Archer née De Tedney Collins, this particular recipe can be attributed to a  Mrs Bunny of Baginton, and is dated c. 19th -20th century.

Catchup, also referred to as Catsup or, by modern day terms, a ketchup, is derived from a Chinese fishy sauce made of anchovies, shallots, wine, vinegar and spices, which was imported to Britain by homecoming sailors and is recorded by the writer Eliza Smith2. These early catchups did not resemble the ketchup we know today – they were basically liquors extracted from food.

At first glance this recipe seems fairly straightforward with few ingredients: 40 cucumbers, 20 onions, ¼ lb of anchovies, white wine port, salt and spice of all kind….how hard can it be? This being said, and unsure of the quantity that will be produced, for the purpose of this ‘challenge’ I decided to halve the ingredients.

Take 40 old cucumbers, 20 middle sized onions, slice them into an earthen pan and strew a little salt between each layer

With all the ingredients assembled it was time to peel and slice the onions……only half done and my eyes are bright red, bloated and streaming – I am sure I have a gadget for this. Next onto slicing the mound of cucumbers – so glad I decided on only doing 20!

Not having an earthen pan big enough, I layer the onions and cucumbers into several Pyrex dishes – sprinkling salt between the layers as I go. Time to let them stand for 24 hours…

Now, the recipe did indicate ‘old’ cucumbers, but unfortunately today’s supermarkets are rather reluctant to sell produce past their best, so after 24 hours the cucumbers were still far too fresh to do anything with. Another 24 hours…..

After a day of occasionally turning, squashing and near enough battering the cucumbers they were finally in a state to strain through a cloth – in this case a new and boiled dishcloth! After nearly half an hour of squeezing I ended up with 5 pints of liquor.

To every quart of liquor add a pint of white port or any other white wine which is not sweet, a quarter of a lb of anchovies and spice of all kind.

As I had five pints of liquor (2.5 Quarts) I needed to add two and a half pints of white wine (two bottles). Unable to source fresh anchovies, I purchased tinned and added them to the liquor. Unfortunately the recipe did not indicate what spices to use, and my first instinct was to use Allspice. However as I was supposed to retain the spices in a flannel, I decided to use whole spices from my larder: Cloves (8); Star Anise (1); Cinnamon Stick (1); Cumin Seeds (a sprinkle); and Cardamom Pods (5). The quantities were completely random. With all the ingredients added it was time to boil slowly for one hour.

After an hour I removed from the heat, allowed to cool, strained and decanted into sterilised Kilner jars.

It looks horrible – like dishwater! It was evident, quite quickly that there was nothing substantial in the recipe to act as a thickening agent, so true to its origins it was just a liquor, and certainly nothing like the ketchups that we recognise today.

And the taste….I could hardly bring myself to taste it, but I did, and it is indescribable. I really cannot think of how it would be used, apart from sloshing around your plate ruining your food! What do you think?