You are here: Home>Locations>Warwick>The Heritage Cooking Challenge: Dare to Pickle a Pigeon?

The Heritage Cooking Challenge: Dare to Pickle a Pigeon? 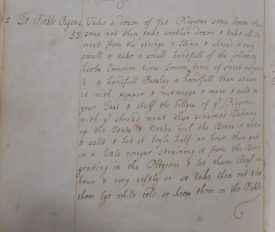 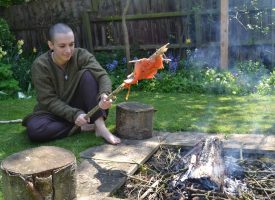 No stranger to culinary adventure! Cooking a salmon on a stick over the fire.
Photograph by Edmund Joyner

WARNING: Please do not attempt this recipe at home, it comes with a risk of some very nasty (and potentially fatal) bugs – especially if you follow the original recipe’s recommendation for the pickle which has a very low vinegar content.

For my ‘Heritage Cooking Challenge’, everyone seems to agree I drew the short straw. Pickled pigeons. Hmm. My partner and I have inadvertently earned a reputation at the Warwickshire County Record Office for daring to attempt bizarre culinary creations – we recently cooked a salmon over a fire using sticks, Ray Mears style. So when this recipe was discovered in the Mary Wise cookbook, dated from the 18th century, all eyes turned to us. We heroically stepped up to the challenge.

There were a number of problems we had to overcome with the recipe. Firstly, it calls for 12 pigeons – we decided to downscale. Secondly, we were rather concerned at the risk of botulism, a rare but life-threatening condition caused by bacteria from badly-preserved meats. The original recipe only called for a small amount of vinegar, watered down. It turns out vinegar in the past was much stronger than we have today. Having never pickled anything before, I did not dare risk a weak vinegar. Therefore, we have skipped out the part of the recipe which makes a pickle from pigeon-stock and instead used a modern pickle. The flavour may be different, but I’d rather it taste strange than be deadly!

Thirdly, I had to overcome the terminology – what does ‘taking up the vents and necks’ mean? As someone who has never deboned a bird before, this was alien to me. It turns out, it means to sew up the two ends of a deboned bird, which makes a parcel to contain the stuffing. Also, the recipe tells us to ‘grate’ the pigeon into the pickle. This is very strange – having gone to all the effort of deboning and stuffing, what is the point of grating it? I decided to discount this altogether, conveniently assuming it is an archaic term for ‘putting’ or ‘placing’.

As with many of the recipes we have encountered, the amounts are rather vague. ‘A small handful’ or ‘to taste’. We guesstimated most of the quantities of herbs.

Below you can find a transcript of the original recipe, alongside my modernised version. Once again, I do not recommend you attempt this, unless you are very confident and know a great deal about food hygiene, preserving and pickling meat.

You can check out the results here.