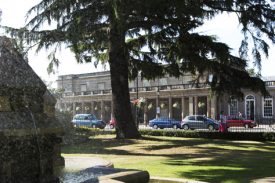 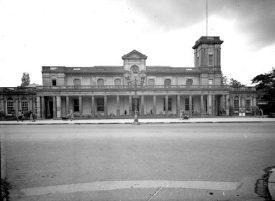 In July 1814 ‘The Royal Pump Room and Baths’, designed and built by C.S. Smith of Warwick at a cost of £30,000 were officially opened. The Spa treatment was claimed to cure or relieve a huge number of disorders, examples being ‘stiffness of tendons’, ‘rigidity of the joints’, ‘the effects of gout and rheumatism and various paralytic conditions’. The Spa water is a mild laxative which is one reason why the water was drunk.

The Pump Rooms gardens were originally laid out and enclosed for the exclusive use of the patrons of the Pump Room ‘to afford them pleasant promenades’. A bandstand was erected and military bands played in the evening during the summer for the gratification of the subscribers. It was not until 1875 that the Royal Pump Room Gardens became public.

The ‘Royal Pump Room and Baths’ paid handsome profits in their early days but by 1848 the fashion of ‘taking the waters’ had begun to decline and hard times loomed on the horizon. The original syndicate decided to cut their losses by selling out and later the Pump Rooms became the sole property of the Hon. Charles Bertie Percy of Guy’s Cliffe.

In 1860, owing to the decline in patronage, he announced his intention to close the Pump Rooms and put them up for sale for building purposes. In 1862 a newly-formed company took over the building and carried out extensive reconstruction work, including the addition of a tower and pediment on the facade.