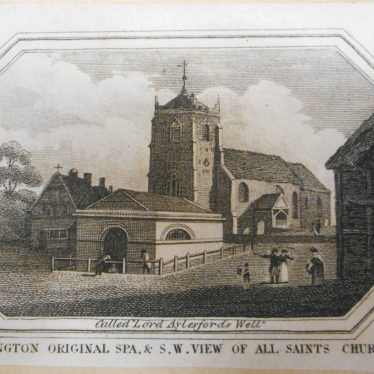 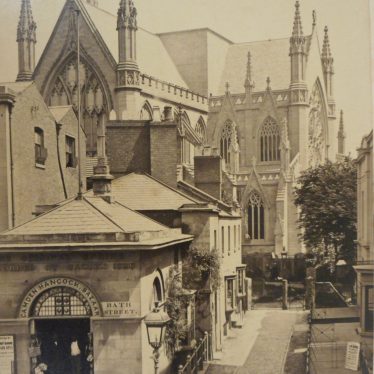 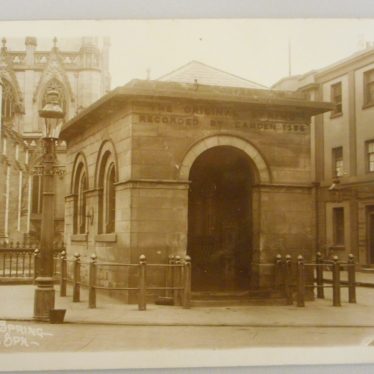 This is sometimes called the Camden Well and sometime the Aylesford Well but it actually pre-dates both these gentleman.

It is generally accepted that the well was first recorded by the noted antiquarian, William Camden (1551 to 1623) in 1585, hence the Camden Well. The 4th Earl of Aylesford, meanwhile, built a structure over it in 1803, hence the Aylesford Well.

There is a timeline to the town’s history that says “1123 – Holy Well of Saint Augustine (the old well) mentioned in history”. There is no information as to where it is mentioned and despite various searches I can find nothing to confirm this.

Glimpses of our Local Past

In his book “Glimpses of our Local Past”, John Charles Manning (1827 to 1907) tells us that “The Holy Well was situated in a sequestered romantic nock, at the west corner of the Churchyard…..” “It tricked from a bank where primroses and violets grew in season and was surrounded by buttercups and daisies in a meadow spreading before in like a beautiful carpet”

When you picture the site today in the heart of a bustling town it is easy to dismiss this as over romantic Victorian nonsense. However, when you think that in 1801 Leamington Priors was only a small village of 315 inhabitants living in a few dozen cottages, the description is probably perfectly accurate.

Curing the bite of a mad dog

The spring probably gained the mystique of a Holy Well due to the fact that it was a saline spring as oppose to a fresh water one. Plus the saltiness of the water would give it a mild antiseptic quality, thus giving it a reputation as a healing spring. In fact between 1778 and 1786 it was credited with curing no fewer than 119 people who had suffered the bite of a mad dog. At the time this would have seemed like a miracle but today we would just put it down to the antiseptic effect of the salt water.

When the antiquarian Sir William Dugdale recorded the spring in 1656 he noted that the local population used the waters for flavouring their meat. Well, having tasted the water myself I do wonder what the meat must have tasted like before if adding this water made it taste better!

The spring is capped

Water continued to be available from the original spring until 1935 when the spring was either capped or diverted and the well house was supplied via a gravity feed from the well under the Royal Pump Room north of the river.

I assume the spring must still have been under the Well House and is still there today. So where has the water been going for the last 80 years? I do seem to remember when I was a child looking over the wall that ran from the Victoria Bridge to the General Post Office seeing a small stream running into the river. So was that the water from the Original Spring flowing into the river much as it had done for hundreds of years before the Well House was built?

Continued from part one. The well’s history is continued in part three.