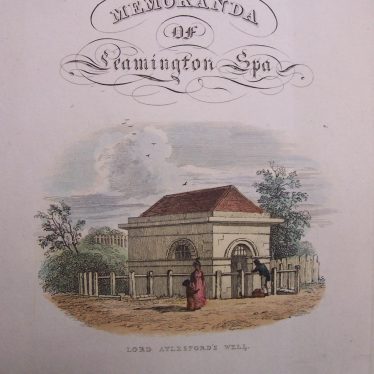 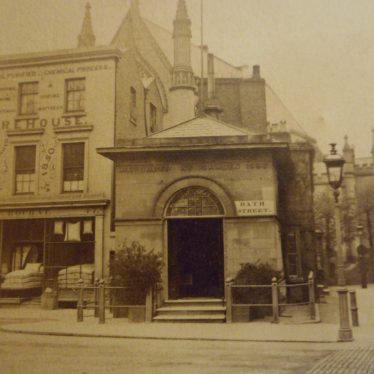 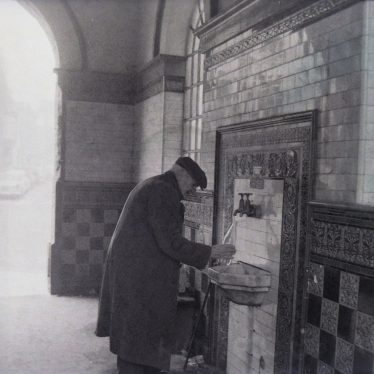 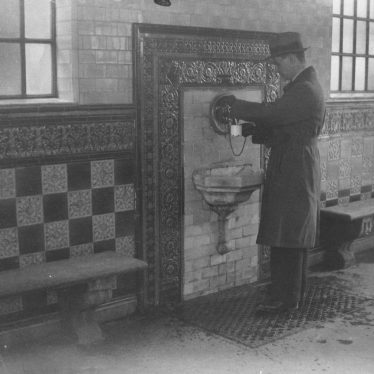 I'm not sure how the chipped enamel cup on a chain would pass health and safety!
Warwickshire County Record Office reference PHN600/342/2 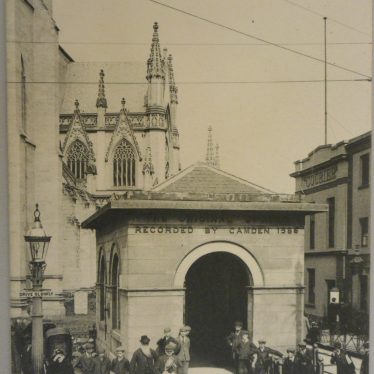 The Well House around 1910. Note the sign on the lamp post. Nothing changes!
Warwickshire County Record Office reference CR350/1423 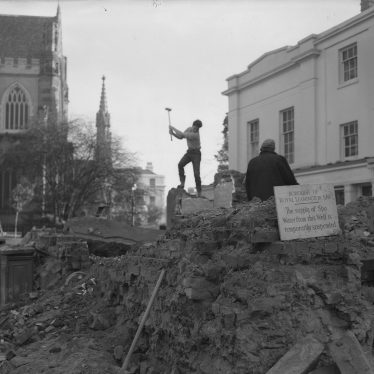 The first well house was built on the instruction of the 4th Earl of Aylesford, the lord of the manor, following a visit to the town in 1803.

The house was built of stone with a flight of steps leading down to the waters. It had two pipes attached to the spring, one which feed the bath inside the house and a second that fed a tap on the outside of the building. This was so that the poor always had access to the healing waters.

A scale of charges

For those wishing to take advantage of the facilities inside the building there was a scale of charges depending on how long you were visiting. The attachment on this page gives a breakdown of figures.

While these prices don’t sound very much now, if you think that £1 in 1810 would be worth around £35 today, you can see how the town’s people prospered from the waters. This probably also explains why, depending on which book you consult, in either 1784 or 1804 a Dr. Holyoake of Warwick offered Lord Aylesford £1,000 for the lease of the Old Well Site. His Lordship refused the offer stating that the waters should never be locked away from the poor.

In 1813 the 5th Earl pulled down the 1803 well house to replace it with a larger one. One account I have read states that it was enlarged again in 1891, but comparing pictures taken before and after 1891 I can see no evidence of this. I think what is more likely is that the building was altered as a chimney stack has gone and the doorways seem to have been opened up. It may also be at this time that the ornate glazed tiles were added inside the building.

When the well house was first built there were very few buildings in the town and it stood more or less alone. However, with the rapid growth of the early 19th century, by the mid-1830s it was at heart of a bustling town. This changed in1890 when the houses on the east side of Victoria Terrace and on the north of Church Walk were demolished to allow for the extension of the Parish Church of All Saints. From then on the well house stood as a focal point in front of the enlarged parish church.

A right to use the well?

This remained the situation until late 1960 when the Well House was earmarked for demolition. There were some people who were not going to let the well go without a fight. One of these was councillor Fryer who made a last ditch attempt to save it at the council meeting held on the Wednesday 9th November 1960, before the demolition was due to begin on the Friday 11th .

He asked if the ratepayers had a prescriptive right to use the well due to their long standing right? The Town Clerk, Mr Sothert, said that up to 1935 the public had acquired a right as “from time immemorial”

However, in 1935 the corporation decided the water should no longer be drawn from the spring under the well house, but piped from under the Royal Pump Room. At this point the right was broken and so this could not be used as an argument to save the well house.

The argument was lost

So the argument was lost and within a few days the building that had been a focal point of the town for 157 years bit the dust with nothing to show it had even been there.

In 1963 the site was marked by a grey granite stone, looking remarkably like a tombstone, bearing an engraving of the well house and a history of the spring. In more recent years this too has been removed, to be replaced by a modern sculpture representing the healing waters flowing from the earth.