You are here: Home>Locations>Knowle>Great Days at The Lido in Knowle

Great Days at The Lido in Knowle 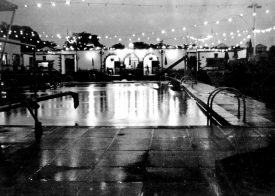 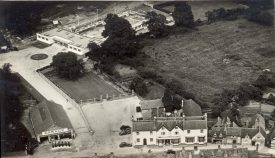 It is surprising today to realise that a small village like Knowle was very fortunate to have the facilities of a Lido during the years before the Second World War and up to the early 1960s.

In 1935 the Greswolde Arms was sold to the Bendall family. Mr. Frederick Bendall extended the inn, adding 12 new bedrooms and the ‘Bon Viveur’ off licence department. Mr. Bendall used part of the land at the rear of the inn to build an open air lido, which was far superior to anything else of its kind in the area at that time, with wide terraces for sun-bathing surrounded by lawns and flower beds.

The Lido was opened in June 1936 , as the panoramic vista shows it was set in idyllic surroundings  and had extensive facilities including  free parking  and changing rooms. The pool  was large and well equipped, it had a set of diving boards,  which included  spring boards  and a water chute for its patrons to enjoy.

The Lido provided the facilities for people and their families to learn to swim and show off their diving skills and generally have a good relaxing time. It was the scene of many water sports and bathing beauty competitions, it was very popular, both with Knowle residents and people from further afield.

Val Morton who has lived in Knowle and the surrounding area for many years remembers enjoying the Lido:

… the Gres’s open air swimming pool was a great attraction – we thought it was quite continental, with its terraced lawns and bright umbrellas, certainly the closest we would get to the Cote d’Azur in those days.

Some local lads enjoyed the pool and its surrounds, as John Lyons, son of a local butcher who grew up in Knowle recalls:

Many happy days were spent playing in mass games of cricket and football in the small field adjoining the Lido. There would then be a mass exodus to the pool to cool off, where 15 or 20 kids would form a procession to ‘bomb’ off the top board. At weekends in summer the Lido was packed with young couples. Our favourite trick was to buy a ‘jubblie’ drink and fill the empty carton with water from the pool. We would then run along the row of face-down, sunbathing belles, spraying their bare backs with cold water. Somehow the boyfriends never caught us. Maybe they were too busy laughing, or just looked on us as mischievous young kids.

There was a cafe on site which was part of the Lido which was very popular serving ice creams, soft drinks and other beverages. During the summer months it was a magnet for local children who could buy a season ticket to use the Lido as frequently as they wished.

End of an Era

As new pastimes developed and cheap family holidays abroad became popular the appeal of the Lido diminished and it closed in the mid 1960s. During its heyday it provided hours of fun and pleasure and those halcyon days are remembered with great nostalgia by local residents who still regret it is no longer there to serve the local community. There is no trace of the Lido today with housing now built (Crabmill Close) on the land it once occupied.

Edited by Jerry Tucker, based on information by Knowle Local History Society.

If you would like to know  more about the Greswolde Arms, Knowle Local History Society has produced a booklet ‘The Greswolde & Mermaid Arms’ which is a short history of Knowle’s premier coaching inn. Further details about obtaining copies can be found on their website.