You are here: Home>Locations>Coventry>Church Bell Ringing in Coventry and Warwickshire 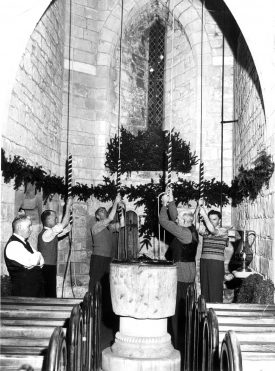 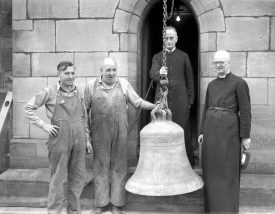 The sound of church bells forms part of our collective memory, as children, from weddings, national celebrations or even funerals. However, few have knowledge of what goes on in the tower and the following gives a brief insight.

Bells have been used both for religious and other purposes for at least four thousand years, some of the earliest being recorded in China. The use of church bells swung full circle is peculiarly ‘English’; in other parts of the world, bells are generally rung by swinging in a small arc or fixed and struck with hammers. English ringing involves mathematical ‘changes’ as opposed to tunes and there are some 6,000 churches in the British Isles with sets of bells rung in this manner. It is ‘English’ in the sense of being Anglican since, with the exception of a few Catholic churches, other churches viewed the use of bells as idolatry.

Skill rather than strength

There are 50,000 bellringers in Britain, of whom about 600 are in the Coventry Diocese. Bellringers are organised into ‘teams’ in the churches at which they ring, but go round to visit other churches as well. They usually ring the bells twice on Sundays. They are also rung for weddings, mostly on Saturdays, and for other special occasions. Change ringing and tunes can be rung on handbells, normally with each person ringing two bells. It is quite a different activity to ringing the big tower bells. The bells themselves are made of 77% copper and 23% tin and are cast in moulds, a bit like making jelly. The heaviest bell rung manually in Britain is at Liverpool Cathedral and weighs 4 tons 2 cwt (4,200kg). However, it is skill that is needed to ring bells more than strength.

The archives of the Coventry Diocesan Guild of Bellringers give an opportunity to research an unusual aspect of Warwickshire church and leisure activity across towns and villages. The first two volumes of the ‘peal books’ which record ringing for special occasions are works of art with page edges decorated by hand, each differently. The past generations of ringers may be known to their families but their activities not readily apparent to others – they include at least one past Mayor of Warwick! Why not discover this little known part of Warwickshire life for yourself?

This is an abridged and edited version of an article originally published in the Friends of the Warwickshire County Record Office Newsletter, January 2006, and is reproduced with their permission.

Map marker in the right place? If not, please correct the map.
Locations
Coventry (105)
Subjects
Bells and Bellringing (23)
Date