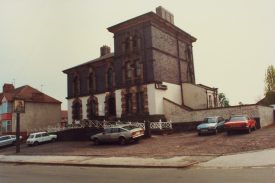 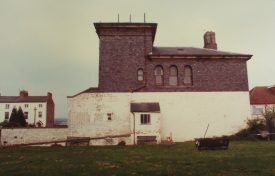 We’ve dealt with this building earlier, referring to its time as a prison, but in that text we only made fleeting reference to its time as a pub. We said how landlord Leslie Guy Rose moved from the Stag and Oak down the road, and claimed to be the only man ever to have held a licence to serve drinks in a prison. John Crossling gives a brief run down of the pub’s history, mentioning that Rose continued to run it until at least 1956. The last recorded licensee in 1981 was Raymond Morris. Crossling reports that it remained a pub until the late 1980s after which it stood empty for several years until being converted into offices.

The Warwick Advertiser of 9th October 1981 recounts how when Rose took the pub over in 1935, beer was 4d a pint, draught 7d, and cigarettes 11½d for 20. Day trips to the seaside were also run thanks to a club where members paid 6d a week.

There were few changes made to the building when it was converted to a pub with (naturally) a bar being installed in the entrance hall, an internal wall being knocked down, and the approaches changed; a ramp made entering the building easier than the steep steps. Indeed, the lack of alteration meant that the bars stayed on the cellar windows!1 Although the building had 15 rooms, only the two at the front were used for the pub when it was first converted2. John Crossling remembers visiting the pub shortly before it closed and being struck by the unusual proportions of the rooms in particular the thickness of the walls and the high ceilings.

I pass by this building on my way to work and, to be honest, I rather like it, it has a presence on the street. The images featured on this page however, from around the time of its closure, look rather foreboding!

The newspaper articles are part of a collection held at the Warwickshire County Record Office, reference PH956.