You are here: Home>Locations>Warwick>Warwick and the Great War

Warwick and the Great War

Recollections of a childhood view 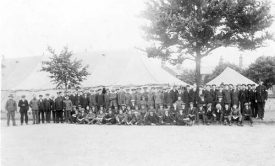 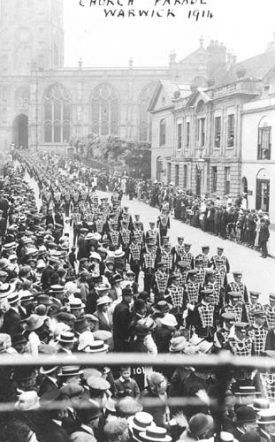 A Mr. Cole wrote down his reminiscences of his childhood in Kenilworth and Warwickshire, around the time of the First World War. His recollections of the start of the war offer a perspective of those times.

The start of the Great War

You may have heard how what we call the Great War started. In the last week of July 1914 I was on holiday in Warwick. The County regiment, The Royal Warwicks, one of the most famous regiments in the British army was holding its annual Camp on the Common (Warwick Racecourse). The regular Battalion which was in Budbrooke Barracks arrived at the camp site first and set up Camp. The soldiers engaged in mock-battles among the cattle grazing on the Common, I saw these battles in progress. On the command the troops ran into position and formed squares, as done at Waterloo. A month later the chaps were fighting in France and Belgium against an enemy which had moved with the times. I feel I must repeat the confidential vote we little boys passed on the situation. One of my uncles was the “crack shot” of the 7th Warwicks, never known to miss the target was my uncle’s record. Someone should warn Kaiser Bill and the other German fools how dangerous it was to rouse the British Lion.

War was declared on the 4th of August, what a livener for sleepy Warwick. The town seemed full of half drunk reservists on their way to Budbrooke Barracks, boasting what was to happen to all Germans, Kaiser Bill and all. But who could doubt that this would be so. One English man was worth about a hundred Germans, and don’t forget “The Warwicks” are going and they are the best fighters in the British army. Uncle Cecil is going and he is a Sergeant and the crack shot of the 7th Batt (Territorial). Arthur Copson is going with the yeomanry. The war is as good as won!

Marching down the Hampton Road

We see the “Warwicks” come marching down the Hampton Road, full band out in their Red coats. Drums Beating, Bayonets fixed, Colours Flying. “Heads up Warwicks” we shout. Last Sunday morning we hardly noticed them as they went in the same way on Church-parade, but this is War. Life will never be the same again for any of us but of course, we do not know this.

Map marker in the right place? If not, please correct the map.
Locations
Warwick (1239)
Subjects
World War One (97)
Date