You are here: Home>Locations>Warwick>The Bread Charities at St Mary's Church in Warwick

The Bread Charities at St Mary's Church in Warwick 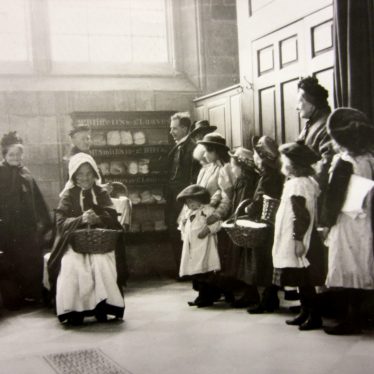 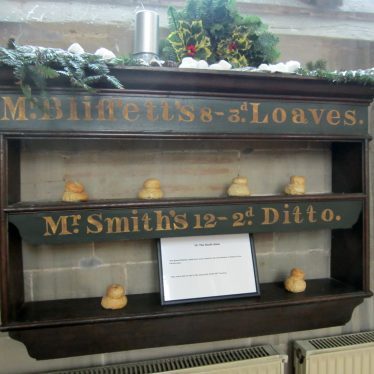 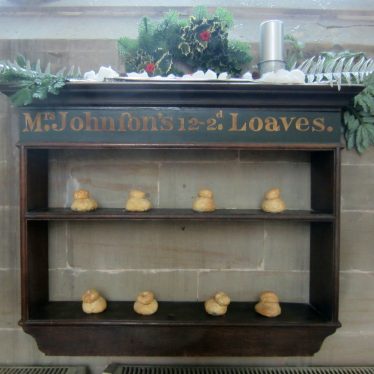 The old photo shows the distribution of loaves of bread from the charities of Mr Blissett and the Rev. Smith in 1899. Mr Adams (the ‘Custos’ or guardian of the Church) is fourth from the left helping to distribute the loaves; he served as a verger until he was 91 years old. The bread rack still hangs on the south wall of St Mary’s Church in Warwick, along with another rack, for Mrs Johnson’s loaves, and some explanatory notices.

Joseph Blissett was a woollen draper and twice Mayor of Warwick who died in 1713; he left money in his will to distribute eight threepenny loaves each Sunday to poor people who lived in the parish of St Mary. Distribution had ceased by the 1960s and the remaining funds became part of the Warwick ‘Relief in Need’ charity (which combined the resources of 21 small charities in 1976). Bread was, however, distributed briefly again in 1978 and 1979.

John Smith was born in Warwick in 1562 and served as vicar of Sherbourne for 37 years. He left money in his will of 1624 for the poor of the parishes of St Mary and St Nicholas. The funds were used to purchase bread, clothing and shoes for the poor. His name appears on the bread rack (which was presumably constructed some time after 1711). After the distribution of bread ceased this charity also became part of the ‘Warwick Relief in Need’ charity.

Ann Johnson, the widow of a Warwick physician, died in 1733 at the age of 84. She left her estate for the benefit of the poor of Warwick. This charity joined with two others to form the Warwick United Charities in 1907. Bread was distributed until 1926 when money for the elderly was substituted.

The cost of bread

It’s a long time since we were able to purchase a 2d or 3d loaf! What did bread cost in your young day?

Sources: Notices in the Church and Rosemary Booth’s ‘To Divers Good Uses: a directory of the Warwick Charities past and present’ Warwickshire County Record Office, 1993.

email
More from Warwick
More from Charitable Organisations and Fundraising