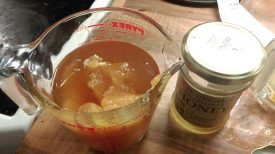 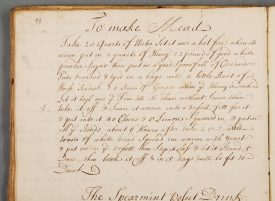 No, this isn’t an episode of Breaking Bad, and metheglyn isn’t some illicit substance! It is, in fact, a name for spiced mead which derives from two Welsh terms for healing liquor.1 Being reenactors and therefore avid mead fans, we couldn’t resist the opportunity to try out this historic recipe from the Waller collection held at Warwickshire County Record Office.2

We’ve made homebrew wine before, with varying success, so armed with experience, equipment and a whole lot of sterilising solution, we began…

Quarts to a gallon

It all started with the now-familiar process of scaling down the recipe. We didn’t have space to brew 20 quarts(!) so we scaled back to something closer to the usual gallon demijohn (1/4 of the recipe). We also weren’t able to locate horse-radish root, so we added a bit more ginger to oomph up the warmth. Having a lot of spices in a mead can help to cover over any unpleasant flavours. This would have been useful at a time when sterilisation was not so sophisticated and there was a greater risk that the wine would get infected.

It was also interesting that the recipe used both honey and sugar – modern recipes suggest that using sugar can thin out the flavour of honey and make it less ‘meadlike’. However, I would have expected sugar to be more expensive – was this a practicality, a preference or a show of status? It made things cheaper for us, so I’m not complaining.

The recipe also describes floating slices of toast on the surface of the fermenting mixture, with the yeast sprinkled on top. This is a method of providing the yeast with slow-release nutrients as the bread becomes soggy. It was more popular in the years before dedicated yeast nutrient was available to buy.

Storm in a teacup

The other unusual thing about the recipe was the timescale. From experience, it takes a few months to ferment out wine and then they’re best left for a year or two before drinking. However, this recipe told us to ferment for only five days before bottling and then drink it five days later. I had to re-read it a few times, and was still not convinced. Surely this would make a very weak, very sweet mead that was still fermenting?

Then I discovered ‘federweißer’ (or ‘sturm’). This is a German and Austrian sweet alcoholic drink which is typically only 4% and is sold whilst still fermenting. The carbonation gives it a fizz, like a soda. It gets its name from the suspended yeast which looks like white feathers (federweißer) or a storm (sturm). This sounded exactly like the kind of drink this mead recipe would produce.

Worth a shot then. Let’s see how it goes…

1  Honey was used in a number of Anglo-Saxon medicinal treatments, and has anti-bacterial properties