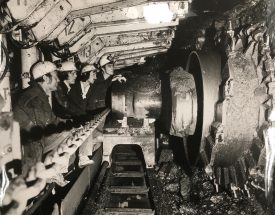 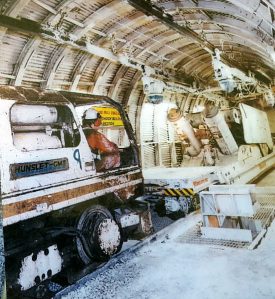 Daw Mill Colliery was a natural development of Kingsbury and Dexter Collieries which worked the coal in the northern end of the coalfield. It was the only new colliery to be opened in Warwickshire after the nationalisation of the coal industry.

Initially intended to be a new shaft to ease the ventilation problems in the Dexter workings, site work at Daw Mill commenced in 1956. Late in 1958, when the shaft had reached a little over a third of the planned depth, it was decided that Daw Mill would become a new colliery handling the coal from Dexter with administration and coal preparation centralised at Daw Mill.

By the late 1970s the colliery was consistently producing coal close to the shaft capacity, so the National Coal Board decided to drive a drift from the surface to link up with the main underground truck conveyors and provide extra capacity for output. Output at Daw Mill remained consistently high, and in 2008 it produced 3.25m tonnes of coal, beating the record for annual output previously held by Selby Colliery in North Yorkshire.

On 22 February 2013, a major fire broke out underground. As soon as the fire started, 100 miners were evacuated, leaving 14 underground to try to control the blaze. They tried to contain the fire for four hours before being overwhelmed, eventually conceding defeat and abandoning the pit. The fire had caused extensive damage underground, and UK Coal announced the closure of the mine on 7th March 2013. Daw Mill was the last operating colliery in Warwickshire and one of the last deep mines in the country.