You are here: Home>Locations>Warwickshire unspecified or out of county>Historic Records of Domestic Violence in Warwickshire. Part One

Historic Records of Domestic Violence in Warwickshire. Part One

'I did not aggravate you'. Annie Yates' message to her abusive husband.
Warwickshire County Record Office, reference QS30/65/Michaelmas 1888 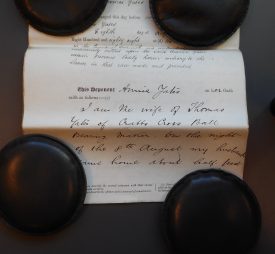 Archives don’t just record weddings, births, and celebrations. They record the whole spectrum of human experience; pain, fear, uncertainty, loss. But there are some areas of human experience which are difficult to talk about as archivists or historians. They can be hard to understand, or it can be hard to find the right words. Although it seems easier to  avoid them altogether, they should not be ignored.

Domestic violence is one of those topics.

A short while ago, a 19th century witness deposition was brought to the attention of archivists at Warwickshire County Record Office by a woman who has experienced domestic abuse herself. When she read the testimony, it resonated deeply with her. The document was about a woman who had been attacked by her husband, and at the end she says that she didn’t want to prosecute him, she just wanted it to stop.

The researcher said, ‘it was physical when I read her statement about wanting it to stop – because that was how I had felt, but never articulated it.’

Fortunately, the woman is now free from that situation and living a happy and independent life. Hearing her speak about the impact the testimony had on her, demonstrates why the preservation and use of records of this type, even though uncomfortable, is important.

The testimony of Annie Yates

This testimony is part of a collection of witness statements taken for court cases held at the Warwickshire Quarter Sessions (the Crown Courts of their time) over the period 1824-1958, many dealing with serious crimes.

(This section contain descriptions of domestic violence which may be distressing )

On the evening of 8th August 1888, Annie and her husband Thomas had returned from the pub, having had two pints of ale, and sat down to dinner. Thomas said, ‘I suppose you are going to put your b— grandson the best bit’. Annie replied, ‘the boy does not want any, hold your noise’. At this, Thomas picked up the carving knife and threw it at her. He missed, and she ran from the house. He caught her, kicked and beat her, and broke her leg. He then dragged her into the house, bolted the door, beat her further and left her in bed, daring her to speak or make a noise. All the while, he was threatening to break her other leg, throw her out the window or kill her.

Could not get into the house

The neighbours heard the initial screams but could not get into the house through the locked door. In the morning, they came over and Thomas told them he was sorry for his actions. They offered to drive Annie to the station so she could get to hospital, but Thomas refused to let her leave. Instead, a doctor was called who found her leg to be broken, her spine and ribs severely bruised, and that she was suffering from shock. She had been left in pain without medical treatment overnight. The following night Thomas threatened her again, and she had to have her son and daughter sit with her through the night for protection. Two months later, her leg was still not fully recovered.

The final sentence of her testimony is the most moving. Directly addressing her abuser before she signs her mark, Annie states, ‘I did not aggravate you’.

A full transcript of the testimonies can be found in the downloads section of this page. Thomas’ only comment to the court was that ‘it was her daughter’s fault’. He was sentenced to two months in prison with hard labour, only twice as long as his previous sentence for stealing a pair of boots.2