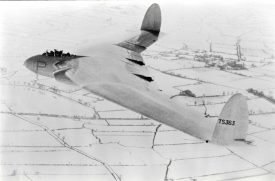 The AW52 in flight over snow-clad Warwickshire.
Photo courtesy of Alan Griffin 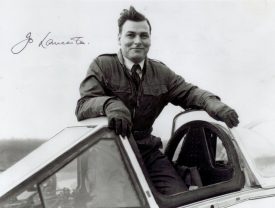 It isn’t often that folk in rural Warwickshire are witness to a plane crash and an event of historical significance but my late parents were. On a sunny Monday morning in May 1949 my father was loading his baker’s van at the windmill in Southam prior to his daily delivery round when he became aware of the rather strange sound of an aircraft overhead. Not the normal sound of a propeller driven aircraft but the quite different sound made by jet engines seldom heard just after the war. He could see that this was no ordinary plane but something the like of which he had never seen before; a prototype, tail-less aircraft which he later learned was known as ‘The Flying Wing’. He called my mother and from their elevated vantage point they watched in amazement as the plane rapidly lost height and crashed a few miles North East of Southam. A parachute floated serenely down and suspended beneath it was what they hoped was the aircraft’s pilot.

It was later reported that an AW52 experimental aircraft designed and developed by the Armstrong Whitworth company at Baginton in Coventry had crashed on a test flight near Leamington Hastings. The local papers gave few details but reported that the test pilot ‘Jo’ Lancaster had made a safe descent and had landed uninjured in a Long Itchington farmyard. So what, you may ask, was the historic significance of this event. ‘Jo’ Lancaster owed his life that day to the recently developed Martin Baker ejection seat and this was the very first time that it had been deployed in an actual in-flight emergency. In the ensuing years the Martin Baker ejection seat has saved the lives of over 7,300 aircrew since that Summer morning in 1949 when ‘Jo’ Lancaster dropped rather unexpectedly into the Shepherd’s manure heap in Long Itchington.