You are here: Home>Locations>Warwick>The SS Suevic and the Aftermath of Its Accident

The SS Suevic and the Aftermath of Its Accident 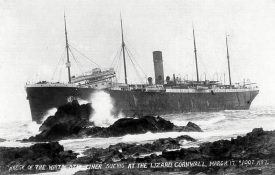 Wreck of the Suevic at the Lizard, March 17th 1907.
Reproduced by permission of https://www.cadgwith.com/suevic.htm 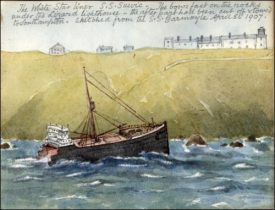 The White Star liner SS Suevic - the bows fast on the rocks under the Lizard lighthouse - the after part had been cut off & towed to Southampton. Sketched from the SS Garmoyle, April 5 1907.
Ernest Arthur Binstead. University of Glasgow Archive Services, Ernest Arthur Binstead collection, GB0248 UGC195/1/5 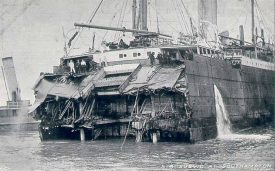 In part one, I discussed the background to the Suevic running aground off the Lizard and the account of a passenger, Warwickshire woman Mrs. Ireland.

When the ship first hit the rocks there were fears it would sink which is why the women and children were put in to the lifeboats. However, by six o’clock it was clear that while the bow was firmly aground and flooded, the stern section was dry and highly unlikely to sink. So the passengers were taken back on to the Suevic to await the lifeboats to arrive from the shore.

Misjudged her jump and was knocked unconscious

Once the bigger “land” lifeboats arrived the passengers had to make their way down ladders hung down the side of the ship and jump into the lifeboat when it reached the top of a wave. Kathleen was carried down by a sailor but Mrs Ireland misjudged her jump and hit the lifeboat’s mast on the way down rendering herself unconscious for a while. However, she says that once they were away from the Suevic she felt almost safe as while on the ship they feared every wave would capsize her.

Once ashore the “Fisher folk” of Chad in the Cove, took the passengers into their cottages and gave them tea. Kathleen apparently took the experience in her stride and was picking up shells and seaweed as soon as the lifeboat landed. She says a tug came to collect them at 3pm to take them to Falmouth where the agents for the White Star Line took them to hotels. She remarks how awful it was going through the streets of Falmouth “all dirty and rough” as the crowds cheered them on.

At the time of the accident the SS Suevic was only six years old, having been launched by Harland and Wolff of Belfast on 8th December 1900. This, coupled with the quality of her construction, plus the way she was designed, meant that despite the bows being wrecked and her forward holds breached, from the bridge aft, almost three quarters of the ship, was virtually unaffected by her encounter with the Stag Rock.

The ship is cut in half

As such White Star came up with a radical plan to salvage her. On 2nd April, using dynamite, the ship was cut in two just aft of the bridge. The stern section was the made seaworthy and sailed to Southampton. Although guided by tugs, the Suevic sailed to Southampton under her own steam.

A new bow section was built at Harland and Wolff and towed to Southampton, arriving on 25th October. J. I. Thorneycroft & Co. of Southampton then joined the two sections together and in January 1908, less than 12 months after the accident, the ship resumed service on the Australia route.

Apart from one trip to the Dardanelles as a troop ship in 1915 the Suevic spent the remainder of her time with White Star on the Australia service. She was sold by White Star in October 1928 to the Norwegian shipping line Finnvahl A/S for £35,000. They renamed her Skytteren and converted her to a whale processing factory ship.

In April 1940, following the fall of Norway to Nazi Germany, the Skytteren was interned at Gothenburg in Sweden. There she remained until 1942 when, along with 14 other ships, she made a break for the open sea to join the allies.

However, not wanting to risk their neutrality, the Swedish Navy steered the convoy out of their territorial waters where unfortunately they found the German navy waiting for them. Of the 15 ships only two escaped. Six were sunk, two were captured and three returned to Gothenburg. The remaining two, including the Skytteren scuttled themselves off the coast of Sweden on 1st April 1942.

Linkedin
More from Warwick
More from Accidents
More from Boats, Ships, Ferries and Tankers
More from Coast and Sea