The Phantom Lorry of Ryton on Dunsmore 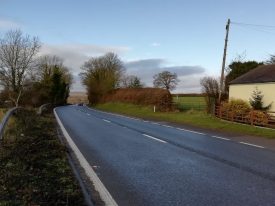 A45 near Stretton, the top of Knightlow Hill.
Image courtesy of Gary Stocker 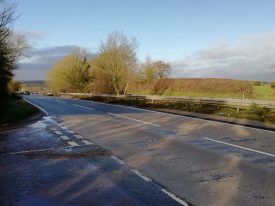 A45 from Freeboard Lane, Stretton on Dunsmore
Image courtesy of Gary Stocker

The A45 London Road passes through Ryton on Dunsmore and past Knightlow Hill, where the ancient Wroth Silver ceremony takes place each St Martin’s Eve. There is, however, a phenomena reported from more recent times. The A45 is now a dual carriageway, however it used to be a two lane road, a lot narrower than it is now, with dense tree growth around it in places.

Starting in about the 1930s, there were stories of a lorry, with either a grinning, white faced driver behind the wheel or blazing headlights. It would drive right at other drivers. They would take evasive action, often going off the road and the lorry itself would vanish just before impact. This happened along a three mile stretch with Knightlow Hill at about the midpoint.

In the early 1950s the police officer responsible for that area lived by the A45. Although he knew that many of the locals believed in the lorry, he was sceptical himself. It was not the safest of roads and a lot of lorries, then as well as now, used it. A few times he had attended accidents when a dazed driver would go on about a lorry heading straight towards him, only to disappear upon point of contact. Often he put it down to drinking too much in one of the local pubs.

On a winter night…

Until, that is, one winter night in 1952. He was driving down Knightlow Hill. The weather was dreadful, with snow and fog. He heard a lorry skid and turn over, closely followed by a succession of cars piling into it. To try and stop any further collisions, he hurriedly deputised the uninjured drivers and got them to build bonfires a hundred yards either side of the collision, to warn approaching drivers. They also procured some red lights. That all in place he went to deal with the injured.

Then someone shouted that there was another one coming.

He heard another lorry approaching and sure enough an old fashioned looking lorry, with a tarpaulin on the back and headlights blazing, appeared. He could not believe that the driver had not seen the warning light/fires! As the lorry roared past he was aware that he could see one of the warning fires through the lorry. He ran towards the pile up, expecting to hear a loud crash at any moment, only to find that the lorry must have disappeared into fresh air.

Asked about it years after he had retired from the police, he said that he had always been sceptical of the phantom lorry, but was convinced that he had seen it that night. A possible explanation was given by a correspondent to the Coventry Evening Telegraph a few days after. As a boy he had lived with his family in Stretton on Dunsmore. In the winter of 1926-1927, his father was late cycling home from work. He said that a lorry had crashed at Knightlow Hill, caught fire and killed the driver. Could this be the origin of the phantom lorry and driver? It is curious that the first report was in the 1930’s, after this event.

Possibly after the A45 was improved and made safer, the phantom lorry stopped appearing.

Linkedin
More from Ryton on Dunsmore
More from Folklore and Myth