Growing up in Wellesbourne 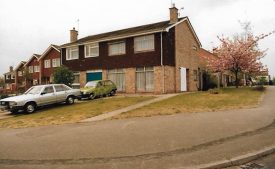 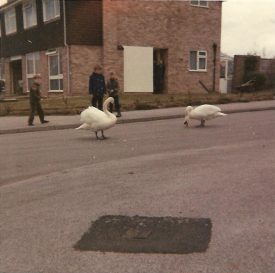 Not that I remember it, but we moved to Wellesbourne when I was two and a half years old in 1967. It was on a new estate, called the Willowdene Estate, and was adjacent to the Kineton Road. We lived on the corner of Brookside Avenue and Ash Tree Close. At the end of Brookside Avenue was a large field, which had the River Dene flowing through it, and predictably it was a playground for all the local kids. We knew it as the “cow field”, although they seem to keep horses in there now.

Exploring the area, and angry fish!

At the top of Ash Tree Close was an old farmhouse, which became derelict as time went by – we called this “Hamiltons” after the family that used to own it. A developer bought it and renamed it briefly, “The Nutshell”, and now it is known as Wellesbourne Farm. It was a listed building, so he had to renovate it; he divided the original house into flats and built new houses in the old garden.

Parallel to Willow Drive was a patch of green which we used to call the waste ground. In the run up to Bonfire Night, the neighbourhood used to put combustible rubbish on there for the bonfire for bonfire night. Running parallel to the waste ground was the River Dene. It was quite shallow there. You could go in there, feel through the river bed and discover old, antique bottles. That came to an end though when Severn Trent put a weir in there to slow down the flow of the river, which was causing erosion. The Dene did have fish in there of different shapes and sizes, there were pike in there. Pike are aggressive, although some of the stories which people told about being attacked by them probably were somewhat exaggerated!

A historic kneecap, and swans

One of the doctors at Hastings House in Wellesbourne I remember had an old kneecap on his desk, which always used to fascinate me. It turns out that when they were building the estate they encountered a hitherto unknown Anglo-Saxon graveyard, and the kneecap was from one of the deceased. How the doctor happened to have it, I cannot remember!

In the 1970s for a couple of years running, a pair of swans took up residence on the river. Sometimes they would wander around Brookside Avenue and Ash Tree Close. People were very welcoming and gave them food. I can remember the precinct in the village centre being built, although I cannot remember what was there before. The butcher and hardware shop are still there, although where the VG and later the Shop Around was, is now a café. What was an electrical shop and later the Roundabout (where our school uniforms came from) is now a charity shop. The green grocer is now a funeral director.

I will recall more shops, along with schooldays,  in part two.