You are here: Home>Locations>Rugby>BISF Houses, Rugby 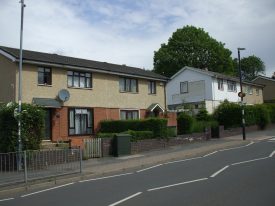 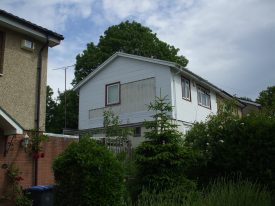 A closer look at the last bit of steel cladding.
Photo by Darren Morgan

We used to go past these on the way to school, known somewhat unflatteringly as ‘tin town’ by those on the bus. As you can see, since those days the houses have been substantially refurbished; the one on the right has some of the old steel cladding showing (possibly deliberately?) but they certainly have a rather different appearance to how I remember them – funny how things change seemingly so quickly, but we’re talking 20 years ago now, I guess!

BISF (British Iron and Steel Federation) was one of the many approaches to post-war house rebuilding. Steel columns provided the frame of the house, the ground floor was rendered, and the top was clad in steel. The windows were made by the same company who supplied the Titanic. Despite our childish musings, the houses were never intended to be temporary, unlike some other prefabs. Apparently, the life span of a BISF house is expected to be the same as any of standard construction, and their reach extends to a website dedicated to them.

Any more sightings of these houses around the county? They’re a dying breed nowadays, but arguably a strong symbol of our heritage, and of post-war efforts at regeneration.