You are here: Home>Locations>Rugby>Christmas Day in Rugby Workhouse During World War One

Christmas Day in Rugby Workhouse During World War One 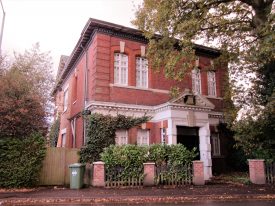 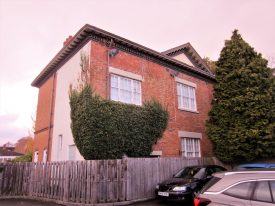 'The Boardroom' formerly part of Rugby Union Workhouse and then St Luke's Hospital (back & side view).
Image courtesy of Anne Langley 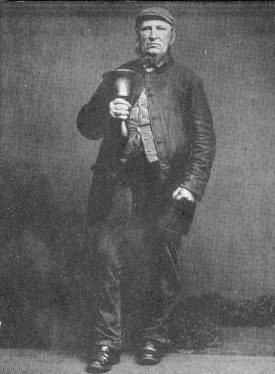 Henry Collins known as 'Snuffy', who was Town Crier at Rugby. He died in the Workhouse on 6th July 1906, aged 65 years. c. 1880s
IMAGE LOCATION: (Rugby Library) PEOPLE IN PHOTO: Collins as a surname, Collins, Henry
Reference: T, B COL, img: 7644
This image is subject to copyright restrictions. Please see our copyright statement for further details.

Dinner included ½ lb of meat per person with mashed potatoes and gravy followed by plum pudding, with beer, lemonade and coffee to drink. The inmates cheered the carvers, the Guardians and the officers. Mr Taylor (one of the carvers) commented on the poster on the wall “To our Soldiers and Sailors”, pointing out that the food they enjoyed relied on the bravery of these men. He thanked Mr and Mrs Watson whom he described as ‘a Master and Matron among the best in England…borne out by all they saw around them…for the comfort of the inmates (renewed cheers)’.

After the meal tobacco and sweets were distributed and in the evening an entertainment was performed by staff and inmates. A ‘good up-to-date gramophone’ played and humorous songs were sung; Matron read a piece and her daughter sang; mince pies and oranges (quite a luxury then) were provided.

A year later the war was more in evidence, with mention of the ‘great need for economy and that everyone should be patriotic in the country’s need’.2 The workhouse decorations included flags of the Allied Forces, and photos of their leaders were prominently displayed. The dining hall tables were decorated with flowers and nurses had decorated the infirmary with ‘evergreens, paper flowers and seasonable mottoes’. At 7:30 a ham breakfast was served with bread and butter and coffee followed by the Master giving out Christmas cards. A religious service was held at 10:30 with an address by the chaplain and hymns sung by the choir.

Christmas dinner included roast beef, pork and mutton or boiled mutton followed by plum pudding and milk pudding. The men had a pint of ale and the women half a pint (mineral water being provided as an alternative). Men received an ounce of tobacco and cigars, whilst women had tea, sugar, oranges, and sweets. The Master and Matron were by now Mr and Mrs Dickens, who were thanked for all their efforts that had ‘succeeded in making this Christmastide, if not a merry one, certainly a very happy one’.

Tea included two kinds of cake and bread and butter. There was a concert in the evening with gramophone records, ‘songs and recitals by the nurses and officers and some of the inmates’.

Gifts to the workhouse

There seems to have been a tradition of local people giving things to the workhouse for the Christmas celebrations: crackers; a Christmas cake and other cakes; cards and almanacs; oranges; biscuits; sweets; sugar; tobacco; and cigars – all dutifully recorded in the …Advertiser. Overall, it appears that the workhouse – at least in Rugby – was not a bad place to be on Christmas Day during the First World War. It compares very favourably with the poor diet suffered by workhouse inmates for the rest of the year.

The Rugby Union workhouse was built on Lower Hillmorton Road in the 19th century between Temple Street and what is now Morton Gardens. By 1955 it had become a Public Assistance Institution and later on it served as St Luke’s Hospital. Whitehall surgery and a block of flats have now been built on the site, but one of the original buildings survives as ‘The Boardroom’ (shown in the photos). This workhouse served Rugby and the surrounding villages.

Do you have a historic photo of St Luke’s Hospital? If so we’d love to add it to this article.