You are here: Home>Locations>Halford>Halford Bridge 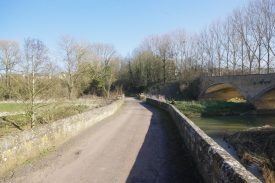 Old and new bridges at Halford, 2014.
Photo by Benjamin Earl. 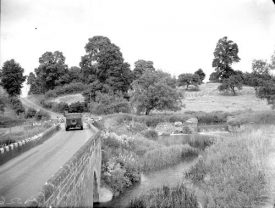 Cross the Fosse Way by Halford now, and you pass by the old 16th century Halford Bridge Inn on the right before crossing the River Stour. Although a pretty road that cuts through Warwickshire’s leafy countryside, it is barely noticable when taking the modern road that you are crossing the river. Take a small diversion past the inn however, and you come across the old bridge, often changed through the years, but a site of strategic importance.

A Crossing Through the Centuries

Halford Bridge is first mentioned in the 13th century, and it is during the English Civil War that the bridge’s significance becomes obvious. Demolished first by the Royalists in 1644, it was later destroyed by the Parliamentarians also. The value of the bridge for transport, communication and trade beyond the parish is perhaps seen by the fact that its repair was paid for by the county itself.

Linkedin
More from Halford
More from Bridges and Viaducts