You are here: Home>Locations>Nuneaton>Site of Nuneaton Mill 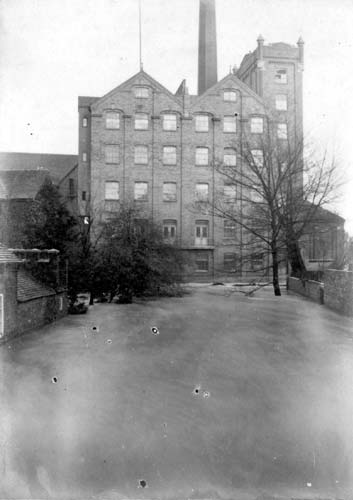 A view of a watermill, viewed from Bridge Street, Nuneaton
Warwickshire County Council
Description of this historic site

The site of Nuneaton Mill, a watermill which was in use during the Imperial period and more recent times. It was situated on Mill Street, Nuneaton.

1 This mill was operating throughout the 19th century and information exists on ownership. From 1921 it operated under the name of Nuneaton Flour Mills Ltd and finally ceased working in the late 1960s. The building was demolished in 1973. The mill was a large, five-storey brick building. A steam engine had been the main source of motive power since 1886. The watercourses around the mill site are still intact.

email
More from Nuneaton
More from Industrial Buildings including Mills (General)
More from Mills
More from Windmills, Watermills and Cornmills