You are here: Home>Locations>Bidford on Avon>Post Medieval Features at 21-23 Icknield Street 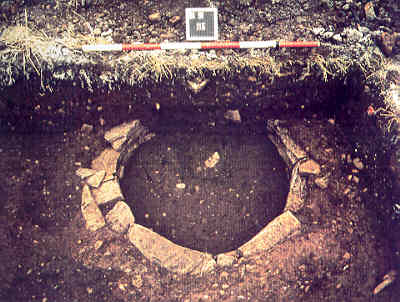 Excavation of a well, Bidford on Avon
Warwickshire County Council
Description of this historic site

The site of Post Medieval buildings and a well which were found during an archaeological excavation. The site was located in Icknield Street, Bidford on Avon.

1 An archaeological evaluation on this site suggests there was no significant Saxon or Medieval occupation of the site. It is likely therefore that after the Roman period the land reverted to open fields or pasture and was not settled again until the Post Medieval period. A Post Medieval phase is evident in trenches 1 and 2. The presence of a demolished roof in trench 1 indicates that buildings of this period existed at the west end of the site. Although unexcavated, it is likely that the well belongs to this phase, as it is similar to a 17th century well recorded on the west side of Icknild Street in the 1970s during the construction of the present sheltered homes.
2 Archaeological observation in 1994 revealed only a rubble surface which probably belonged to the former smithy which is known to have occupied the site.