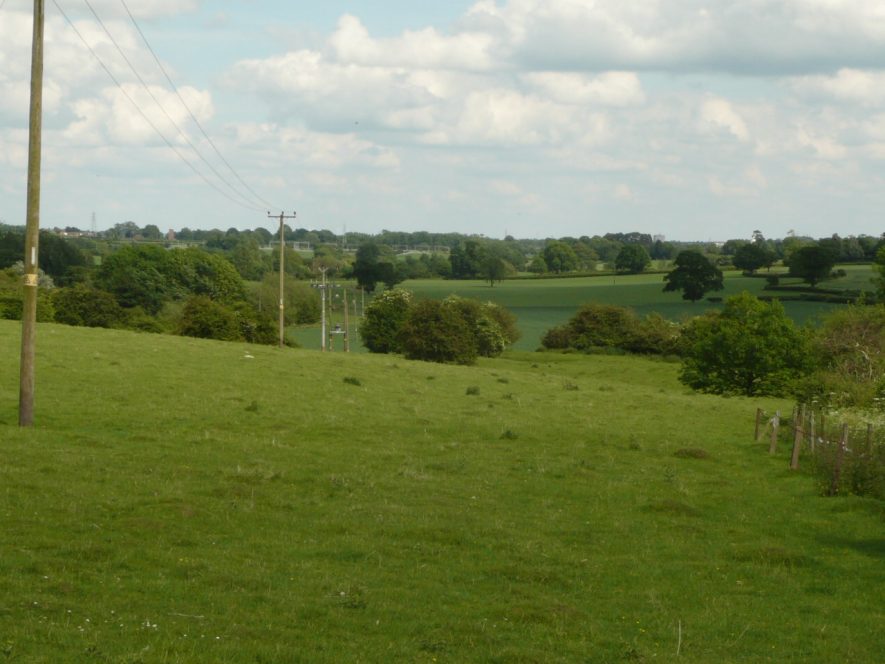 This is the area as viewed from the footpath at SP 457773 it is hard to identify the precise area which the O.S. label Baths refers to but this must be near.
Image courtesy of William Arnold
Description of this historic site

The site of King's Newnham baths which are of Post Medieval date. Documentary evidence suggests that they were restored during the Imperial period. The remains of the baths are now visible as an earthwork. They were situated 500m east of King' Newnham.

1 The mineral springs of Newnham Regis became of some eminence in the latter 16th century. Camden described them as three springs whose water, of a milky colour and taste, is accounted good against the stone. Dugdale does not refer to them so their vogue seems to have been short, but they are referred to as the ‘Bathe Well’ as late as 1699.
2 The baths are said to have been restored in 1857 but are now disused. There is no tangible pre-Elizabethan evidence despite the local claim that the site is that of a Roman villa.
3 There are two baths at Newnham Regis, they are of stone construction with steps, drains and water channels also of stone. The smaller of the two is open and is subdivided into two bathing areas. The larger is partly within the present house and partly open, and is also subdivided. The portion within the house is now used as a store and has a 19th century tiled floor. This bath is capable of total immersion. There is evidence of the 19th century restoration, but much of the work appears to be original and very much earlier. Local tradition tells of the ‘Roman Villa’ here, but there is no evidence of any Roman work to be seen. The baths are now disused and dry, but according to the present owner they fill in times of heavy flood.
4 ‘The house’ of reference 3 may well be ‘Bath Cottage’. This house has recently been altered and there are no traces of the remains of the bath. The site of the baths now exists as a series of hollows and banks and there is no masonry visible.
5 An archaeological watching brief on the erection of an extension to Bath Cottage recorded no archaeological features. A sherd of probably 12th/13th century pottery was recovered from the spoil heap.