Excavation of Neolithic Settlement at Wasperton 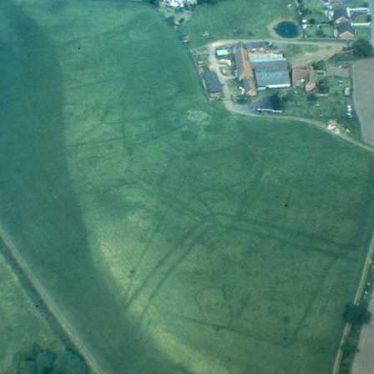 Part excavation of the site in advance of gravel extraction uncovered evidence of a Neolithic settlement. Post holes, a sub circular pit, and fragments of pottery were found. The site lies to the west and south west of Wasperton.

1 Excavations undertaken between 1980 and 1985 in advance of gravel extraction. The earliest material dates from the Late Neolithic. The main concentration was in the NW of Field 2 and consisted of a series of post holes which do not appear to make a coherent structure. One contained sherds of Mortlake Bowl, a second a fragment of Peterborough Ware, and a third a fragment of grooved ware. A sub-circular pit 150m S produced a single sherd of Peterborough Ware. Other features in this area may also have been Late Neolithic. A Group 1 polished stone axe, originally from Cornwall, was an unstratified find, and a fragment of a greenstone axe, probably from Great Langdale, Cumbria (Group VI), was found during the excavation of a barrow ditch.
2 Early scheduling record. SAM 143.
5 Description of 1980-85 excavations.
6 Plans.
7 Two undated pits were uncovered during a watching brief at Wasperton Manor House (MWA 2204) very close to this site.
8 A number of flint wasters found.
10 Early sheduling record. SAM 144.
11 Early sheduling record. SAM 146.
12 Early sheduling information.
13 Report of salvage work in 1981-2.
14 Report of salvage work in 1983.
15 Report of salvage work in 1984.
16 Report from 1979.
17 MSRG 2005.
18 Annotated plan of the complex of settlements.
19 Information about the dates and locations of TL samples.
20 Account of the site.
21 Sketch plan showing location of metal detector finds.
22 Excavation report.
23 Environmental report.
24 Drawings of pottery sherds.
25 Synopsis of the site with plan of the cropmarks.
26 Report from 1982 almost the same as WMA vol 25.
27 Report from 1983 almost the same as WMA vol 26.