You are here: Home>Locations>Dunchurch>Church of St Peter, Dunchurch 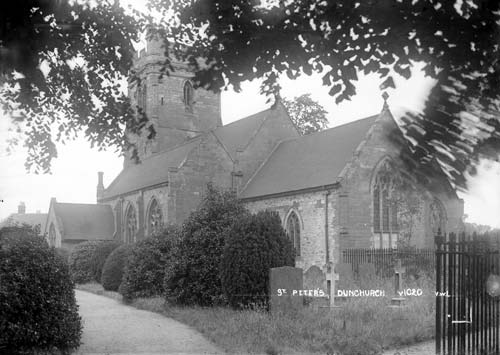 The Church of St Peter which was originally built during the Medieval period. The church was largely restored during the Imperial period. It is situated in Vicarage Lane, Dunchurch.

1 Chancel, nave, N and S aisles, N chancel aisle, W tower and vestry. Almost entirely rebuilt late in the 14th century and the tower added probably early in the 15th century. Little is left of the earlier church other than the chancel S wall, the bases of the arcade pillars and the piscinas, all of 13th century date, and the early 14th century N door. Modern chancel N aisle; modern vestry on site of S porch. Damaged 12th century font basin in nave and some 15th century woodwork. Modern roofs. Restored 1908. The stonework of the tower is badly decayed and much of the detail has been lost. There was a priest at Dunchurch in 1086.
2 Described in Pevsner and Wedgwood.
3 Listed Building description.
4 OS card.