You are here: Home>Locations>Nuneaton>Church of St Nicholas, Nuneaton 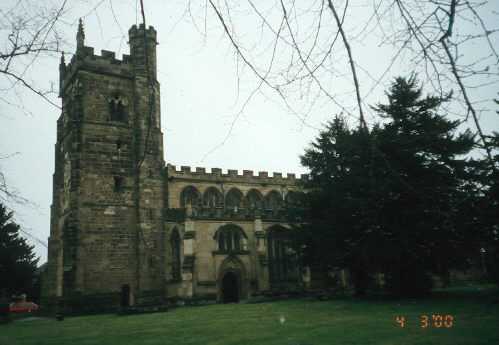 The Church of St. Nicholas which was originally built during the Medieval period. It is situated on Church Street, Nuneaton.

1 Chancel, nave, N and S aisles and chapels, N vestry and W tower. The earliest work remaining is of c1340, i.e. the S chapel and parts of the N chapel and aisle. The arcades of the nave and the clerestory are rebuildings and additions of the late 15th century, and the N arcade of the chancel of the early 16th century, when the N chapel was rebuilt. The W tower is an earlier 15th century addition. A great deal of modern restoration. The S aisle has been rebuilt or refaced. The chancel was lengthened in 1852.
2 Plan.
3 Drawing of c1820.
4 Large and of dark grey stone. Good nave and aisle roofs with bosses. Chancel mostly of 1852; chancel arch by Ewan Christian. Monuments of interest.
5 Photograph.
6 Listed Building Description.
7 An archaeological evaluation in the graveyard prior to an extension, revealed no structural evidence for an earlier church. Two sherds of Romano-British pottery were found and some fragments of 13th/14th century floor tiles.