You are here: Home>Locations>Frankton>Church of St Nicholas, Frankton 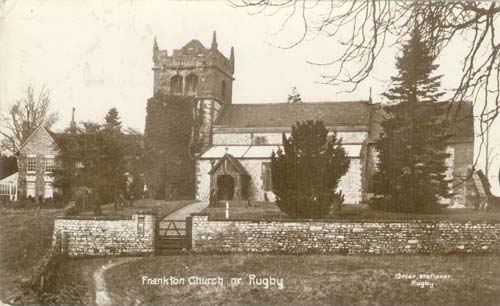 The Church of St Nicholas which was originally built during the Medieval period. The church was largely restored during the Imperial period. It is situated to the south west of Frankton.

1 Chancel, nave, S aisle, W tower, vestry, and S porch. Lower stage of tower early 13th century; the rest of the church was rebuilt in the 14th century, and in the 15th century the upper part of the tower was rebuilt. Of small roughly-coursed limestone rubble with red sandstone dressings, except for the upper stage of the tower, which is red sandstone ashlar. Modern roofs. The church is first recorded in 1291.
2 Drawing of c1820.
3 Short W tower, 13th century below, Perpendicular above. Of the rest most by Scott, 1872. The S arcade responds are of c1300 or a little later.
5 Noted by Ordnance Survey.