You are here: Home>Locations>Chesterton>Chesterton Watermill 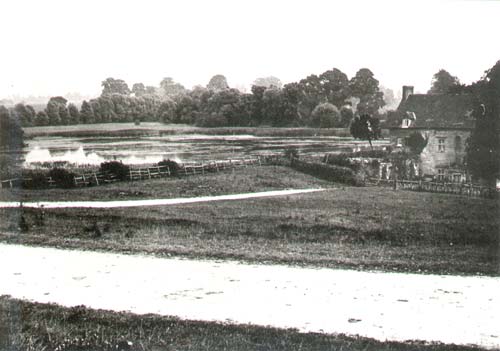 Chesterton Watermill, for which there is documentary evidence from the Post Medieval to the late Imperial period. The present mill building dates to the early 17th century, and an overshot waterwheel is still in place. It stands 350m south of Chesterton Windmill.

1 The watermill and the pond called Mylne Pool are referred to in 1554 and 1689.
2 In hearth tax returns of 1662-74 a watermill with two hearths is recorded. Information for ownership exists in 18th, 19th and early 20th century. The mill closed in 1920’s. The unusual mill building dates from the early 17th century. The date 1628 is scratched on one of the door frames. From the outside it has the appearance of a small, elegant country house. It is thought possibly to have been an early home of the Peyto family. When it was converted into a mill a dam supported by brick buttresses was built across the shallow valley close to the end of the building, and the internal layout adjusted. The waterwheel is still in place, being overshot and measuring 5.8m diameter by 86 cm wide. The Tach Brook which formerly filled the pond has been diverted and the supply is now entirely by spring. The present owner hopes to restore the waterwheel to working order if the water supply can be improved.
3 Architectural description.
4 Watermill c1660, with 19th century additions to left.
5 Detailed large scale architectural plans received from Mr John Spratley by the Planning Archaeologist in 1999.

email
More from Chesterton
More from Buildings and Structures (Parks and Gardens)
More from Mills
More from Windmills, Watermills and Cornmills