You are here: Home>Locations>Wellesbourne>Chedhams Yard, Wellesbourne 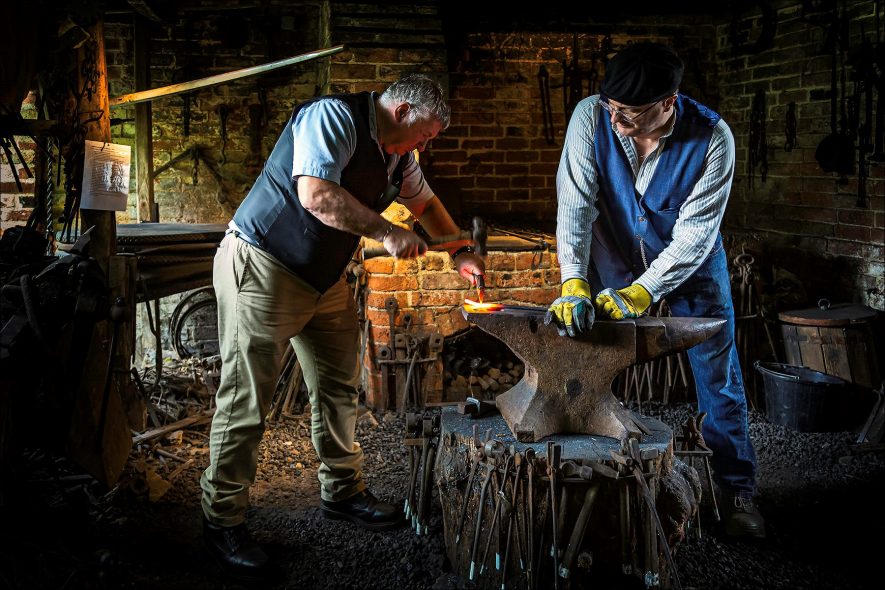 Forging a piece of metal in the blacksmith's shop at Chedham's Yard, Wellesbourne.
Image supplied by Gary Stocker. A visitor to Chedham's Yard took it whilst he was on duty, and said that the yard could use it for publicity.
Description of this historic site

Purpose built wheelwright's workshop and blacksmith's forge which date to the Imperial period and were in existence by 1886. The yard is situated off Church Walk in Wellesbourne.

2 The yard comprises a long thin piece of ground, approximatly 68 metres long, and with an average width of about 10 metres. This widens to approximatly 20 metres at the north end, where the river formerly defined the north-western boundary. The course of the river was diverted northwards in the late C20th, removing a short river frontage that was formerly an aspect of the site. The building has an elongated rectangular plan and incorporates three distinct structures, or blocks, all connected to form a single range. This comprises a workshop to the south, an open-fronted central block and a blacksmith’s forge to the north. The respective blocks are built of brick. The workshop and blacksmith’s forge are shown on the 1st edition OS map. The form of construction, including the brickwork and roof structures, suggests that the forge and workshop are probably of early to mid C19th data, although not of the same phase.
3 The discovery of an intact Wheelwright’s workshop locked away with all its content intact nearly 40 years ago, prompted the parish council to buy the site and contents and embark on a scheme of archaeological recording of the objects, installations and building. The ‘post excavation’ programme is now fully underway and will lead to a CD with a web-like HTML interface where drawings of the thousands of objects ‘in situ’ will be hyperlinked to a database. The parish council hopes to open the restored workshops as a local and regional learning resource.
4 Building survey comissioned by Wellesbourne Parish council
5 Documentary and cartographic research, focusing on development of site from 1860.
6 Evaluation at Chedham’s Yard by WMFSPG in 2007. Evidence for demolished buildings was recorded, together with yard surfaces, a buried tyring platform and quantities of discarded metalwork. A brick-built sawdust pit was also uncovered in the Drying Shed, and part of a possible concrete bank-revetment or wharf, adjacent to the former course of the River Dene.
7The main areas of excavation were the area where the new visitor centre was to be built and the area in front of the workshops, which was to be repaved.The excavation revealed the former yard surface and the tyring plate. A large number of finds were recovered, cleaned and catalogued. The tyring plate was lifted so as to be flush with the new landscaped yard.