You are here: Home>Locations>Charlecote>Charlecote Hall 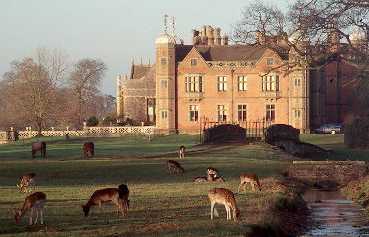 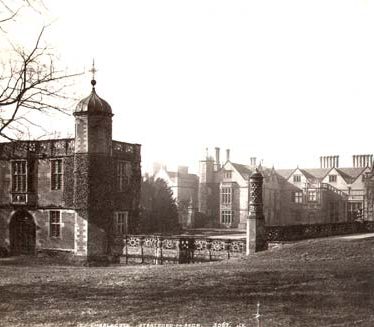 1 According to Dugdale, the house was built in the first year of Elizabeth I’s reign (1559-60). The house was originally made up of a main block one room deep with two projecting wings.
2 The Grade I Listed Charlecote Park House was begun in 1558 for Sir Thomas Lucy. It was restored and enlarged c1829 and c1847-67. A number of important outbuildings and other structures are attached, including the Grade I Listed gatehouse (1558), 16th century stables and a brewhouse, lodges and a mid 19th century orangery. The house was surrounded by a deer park and formal gardens in the Post Medieval period and by a landscape park from the 18th century onwards.
3 Charlecote has been in the hands of the Lucy family since the 12th century but the history of the present house began in 1551 when Thomas Lucy inherited the estate. The early house was an old demense-house of wood and stone and was demolished by Thomas Lucy. According to Dugdale the present house was built in 1559-60 but it is uncertain if this is the date of completion or instigation. Others such as the VCH suggest it was built in 1558. Alterations to the west wing in 1999-2000 revealed elements of original 16th century building work including timber framing on the second floor and parts of early doorsways behind panelling in the main staircase on the ground floor ans first floor after removal of 19th century stud walls and temporary removal of 18th century panelling. The removal of the sprial staircase in the north-east turret revealed make up of the plaster ans areas of internal brickwork and segmental brick arches above the doorways. The latter probably relate to the renovation of the doorways in the mid 19th century.