You are here: Home>Locations>Ettington>Ettington Park House 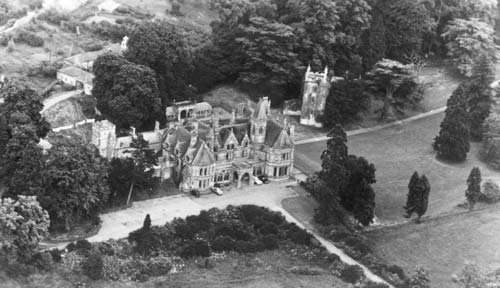 Ettington Park House, a Post Medieval house which was remodelled in the 19th century. It is situated 400m south of Wards Hill and is now a hotel.

1 Architecturally significant gothic revival house by Pritchard remodelling earlier manor house for E.P. Shirley.
2 The earliest parts of the present house were probably built for the Underhill family (tenants of the Shirleys) in the 16th and 17th century. The Shirleys made Ettington their principal seat in 1738, and a number of alterations and extensions, including a new entrance hall and dining room, were made in the 1740s – 1760s. Major alterations were made 1810-11, and further work was in progress in 1820. The west front was remodelled in the Classical style 1824-6, but in 1858-62 the whole house was recased in gothic polychrome stonework. A major programme of restoration has been carried out since the building was turned into a hotel in 1983. Illustrations of 1821 and 1869 included.
3 The Underhill family built Manor House in the 16th and early 17th century. The lease was acquired by ISIS hotel company in 1983 restoring and refurbishing the house, adding a large extension to the north.