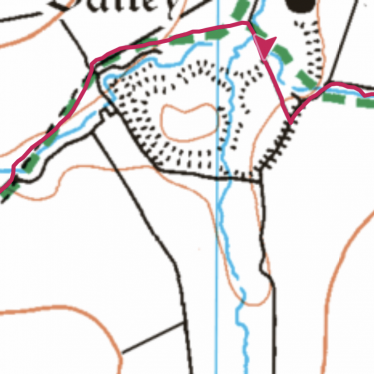 Location on os map from where photo taken
DE IPhone 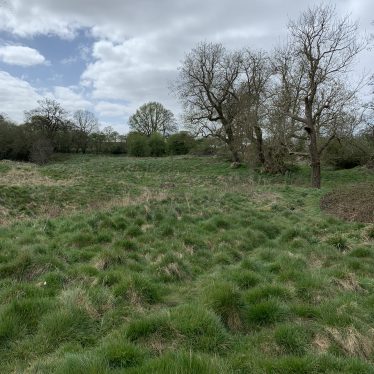 1 A well-preserved entrenchment, nearly oval in form and situated on low-lying ground. Its defences consist of a strong rampart running round a raised internal plateau with a deep ditch beyond. The ditch was probably once filled with water from the stream which still runs through it on the SW side. There are remains of further artificial banks in the field to the S, but they are now worn and indistinct in plan. The site was called ‘Old Fillongley’ in Henry III’s time.
2 A simple earthwork formed of a bank and ditch, oval in shape, about 56m by 39m. If there were ever any buildings within the enclosed area there is nothing now to be seen. It may be a castle in its first stage of development, before the construction of the motte.
3 Scheduled as Warwickshire Monument No 35.
4 A Medieval ring-work castle with a weak bailey on its SW side.
5 A circular mound rising 3.6m to 6m high out of a surrounding ditch, 0.9 to 1.8m below ground level outside ditch. Top of mound comprises a bank 0.9 to 2.4m above level top (slight hollow). Signs of entrance NNW and SSW. Lowest part with little visible ditch on W side along stream.
6 Rescheduled as SM21546.