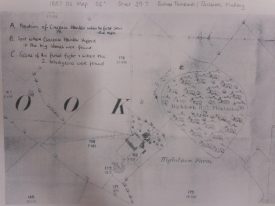 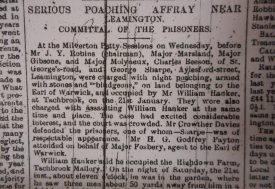 I have lived near Bishop’s Tachbrook, for many years and have been researching my house’s history for a considerable time. When studying the 1887 25” Ordnance Survey map for the area, which is held at the Warwickshire County Record Office, I found this note pencilled on it:

A. Position of Clarence Hanker when he first saw the men

B. Spot where Clarence Hanker slipped and the big stones were found

C. Scene of the final fight and where the 2 bludgeons were found

This intrigued me as I recognised the surname ‘Hanker’ belonged to the tenants of our property from c.1885-1907, and I managed to track down the incident to which the note on the map referred. I discovered that poachers had been caught at Highdown one night in January 1888 and, using Assize records of their subsequent trial1 and its reports in both the Warwick Advertiser and Leamington Courier, I was able to reconstruct what had happened.

Highdown Farm is an isolated situation, with no neighbours and the Wood is about fifty yards away on the crest of a hill. At eleven o’clock on Saturday, 21 January 1888, which was a clear moonlit night, William Hanker discovered three poachers near to Highdown Wood. He roused his three adult sons and they appear to have set upon the poachers with enthusiasm. There followed what was afterwards described as an ‘affray’ between the poachers, armed with stones, and the Hankers, armed with sticks and a broken gun. There were injuries on both sides and eventually two of the poachers (and their dog) were captured and held prisoner in the house until the police arrived. The third one escaped but was later arrested.

The poachers were local men: Charles Beeson, George Sharp and George Head. The trial attracted a substantial crowd and appears to have been a very lively one, with much laughter and support for the Hankers. Newspaper reports included a detailed description of the insults which were exchanged, the expletives being replaced by dots. They also included a blow-by-blow account of the affray, with laughter from the public gallery when, for example, William Hanker said he ‘had the gun by the muzzle and with the butt end hit Beeson twice on the head and said he was very glad he did!’ There were also accounts of the Hankers’ injuries and they appeared in court still bandaged and bruised.

The poachers’ defence lawyer suggested that as rabbits were not, strictly speaking, game, Beeson and his accomplices were technically not actually poaching. However, this defence failed and they were all found guilty of ‘poaching by night, being respectively armed with bludgeons and stones, were unlawfully in certain enclosed land in the occupation of William Hanker, for the purpose therein of destroying game.’ They were then each sentenced to four months’ hard labour in Warwick Gaol.

At the time of this incident, William Hanker senior would have been 62, his son William junior was 24 and Clarence was 23. William and his young family had spent time in Tasmania some 20 years earlier, between c.1860 and 1865. Maybe this had toughened them up and encouraged them to take the law into their own hands when they returned to Warwickshire.

This article was originally published in the Friends of the Warwickshire County Record Office Newsletter, January 2006, and is reproduced with their permission.