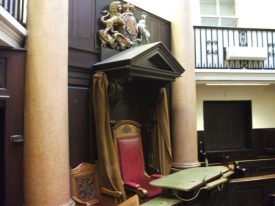 The Judges bench in Court 1
Taken by Anne Warren 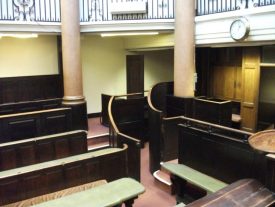 A view of Court 1
Taken by Anne Warren

The Old Shire Hall as it currently stands was rebuilt and completed in 1776, in the Palladian style. It was used at the Warwickshire County Court from then until 2011 when the Leamington Justice Centre opened, replacing it with modern facilities.

There were three main types of courts that sat during this period: the Petty Courts, the Quarter Sessions and the Assize Courts.

The Petty Courts only dealt with very minor cases, such as drunkenness and vagrancy. They were informal by modern day standards. There was no Jury and the courts could even take place in the house of the Justice of the Peace. These courts had the power to refer more serious cases up to higher courts.

The Quarter Sessions dealt with a lot of the criminal cases during this period. Trials were held before a Jury and one or more Justices of the Peace. A Judge/Jury would see multiple cases in one day and would only give verdicts at the end of the day. Typically trials were very short. Sessions were held four times a year as indicated by their name.

Only very serious crimes such as murder and treason were seen before the Assize Courts. Generally the Assize courts only saw cases which were ‘capital offences.’

Judges travelled on a circuit covering a number of counties. Warwick was part of the Midlands circuit. Counties on the Midlands circuit included Nottinghamshire, Derbyshire, Warwickshire, Lincolnshire, Leicestershire, Northamptonshire and Rutland. Like the Quarter Sessions, Juries saw multiple trials in a day and trials were very short. Records from 1833 at the Old Bailey show the average trial lasted 8-9 minutes.

This court dealt with criminal law cases i.e. cases of things like theft, assault and murder. This court is similar in layout to Court 2 except there is a hook by the Judge’s bench for hanging a black hat/cap which the Judge would put on when about to pronounce the death sentence. There are also curtains around the judges bench which were drawn when the death sentence was passed (hence the slang expression “it will be curtains for you” meaning the end or death for you).

The Nisi Prius Court was the court which dealt with civil law cases, i.e. cases between individuals (e.g. John Smith vs. Robert Jones) that involved things like property disputes, inheritance cases etc., so were not criminal law cases. The room has an unusual octagonal design. There was some pressure on the architect Sanderson Miller to design round court rooms but he stuck to his original idea.

This was the court which was used by the Grand Jury to investigate whether there was enough evidence in a civil case for it to proceed, or in a criminal case for an accused person to be formally indicted (charged with a crime), and for the case to proceed to trial at Quarter Sessions or an Assize Court. When they had made their decision whether it was “a true bill”, they would hand their verdict down on a piece of paper affixed to one of the poles displayed on the wall through an opening into Court 1 or 2 as appropriate.

In more recent times this court was altered to a more modern layout and tended to be used for Family Law cases etc., where a bit more privacy might be needed.