You are here: Home>Locations>Warwick>Billheads of William Butler, Veterinary Surgeon

A snapshot of the past 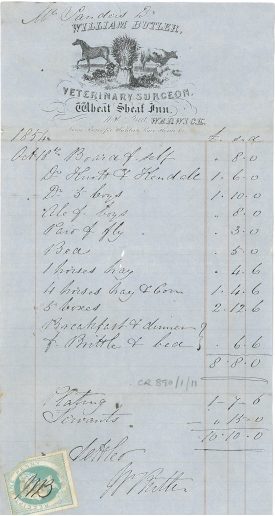 Notwithstanding their small size, billheads often provide fascinating glimpses of the past. Some were very plain but others were very decorative such as those on display. This decoration was essentially functional, immediately conveying the services on offer.

The bill addressed to Mr Sanders is not specifically for veterinary care, but mainly relates to the costs of his stay at the Wheat Sheaf Inn together with his companion Dr Knott and the livery of his horses. Unusual as it may seem today, the combination of a veterinary surgery with a hostelry was a not uncommon practice in the earlier decades of the 19th century. Financial success beckoned when such a combination met a situation of regular race meetings in the town as this bill alone demonstrates.

Farriery was an integral part of a veterinary surgeon’s work, and on this occasion, Mr Sanders paid £1.7s 6d for the plating of his horses’ hooves. As every dedicated race goer knows, this describes the light shoes with which racehorses are shod prior to a race. More than half the total bill of £10.10.0d was for the costs of Mr Sanders’ horses as another £4.1s.6d was required for their feed and stabling. He was in Warwick for the races. On the reverse side of the bill, there are four names, Wild Huntsman, Cock of the North, Morning Star and Florida. From a report in the Warwick Advertiser, four such named horses were entered for the races. The results are sadly unknown. It would have been interesting to know whether the extra 6s.6d for corn was money well spent!