You are here: Home>Locations>Coventry>The Knife Angel in Coventry, Set in Context

The Knife Angel in Coventry, Set in Context 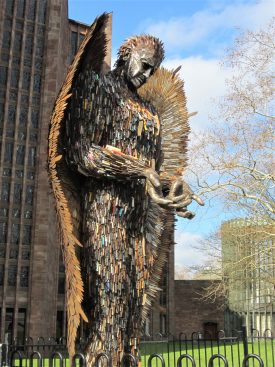 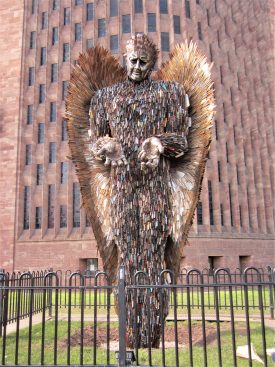 This striking sculpture, at the time of writing, stands outside Coventry Cathedral. The British Ironwork Centre started a campaign ‘Save a Life, Surrender your Knife’ in 2014 and commissioned this sculpture from Alfie Bradley. It has been displayed in Liverpool and Hull and will be in Coventry until the end of Easter (2019).

The sculpture was created from items surrendered in knife banks or confiscated by police throughout the UK as part of efforts to make our streets safer. It stands 27 feet high, took four years to make and contains 100,000 weapons. Relatives of those who have died from knife crime were invited to engrave messages and the names of their loved ones on some of the blades. It offers a dignified and thought-provoking challenge to senseless violence.

Violent assault and stabbing in 1837

Sadly knife crime is not new and the Warwick Advertiser gives details of an interesting case. In 1837 a fight broke out in a lodging house in Crompton Street in Warwick. Three foreigners were sitting by the fire and Michael Hands asked if his wife and 3-month old baby could sit there. They refused: pushing and shoving and name-calling ensued, followed by a more serious assault on Hands pinning him to the floor. When he managed to get up he struck Nicola Varella on the head with a poker. Varella went to get a knife, stabbed Hands in the abdomen and then fled. He was arrested shortly afterwards nearby with a pocket knife in his possession; his two companions escaped (though they were subsequently arrested). A doctor was summoned to treat the victim; he testified to the magistrates that the wound was likely to be fatal and in fact Hands died a couple of days later. 1

Inquest in a local pub

The inquest was held in the Red Horse pub nearby in Crompton Street. The Jury went to view the body at the Lodging House: there were two wounds, one in the arm and the fatal one in the abdomen.  A ten-year old boy out playing with a friend had seen something in a ditch nearby and waded in to retrieve a stiletto with a 7-inch blade. The doctor testified that the stiletto was probably the murder weapon. The Jury returned a verdict of manslaughter against Varella and the two ‘Italians’ who had escaped. Local people expressed surprise that the verdict was not murder, but the local paper suggested that they were prejudiced against foreigners and pointed out that the coroner had made a very clear distinction between murder and manslaughter and recommended the latter verdict. 2

Trial at the Assizes

In March the following year Nicola Varella and his two companions were charged at the Assizes with killing Michael Hands.  Varella was a musician from Naples who had only been in England for 17 months. His two companions turned out to be German rather than Italian; they were found not guilty but Varella was found guilty of manslaughter and sentenced to 15 years’ transportation. He was sent to Van Diemen’s Land (now Tasmania) and worked his sentence, eventually being pardoned in 1849 on condition that he never returned to England. 3

I am very grateful to Sharon Forman for research and details of his transportation and fate in Tasmania, found on Ancestry.