You are here: Home>Locations>Arlescote>A Mysterious Writ to the Sheriff of Warwickshire

A Mysterious Writ to the Sheriff of Warwickshire

The document is less than 25cm long and 2cm wide, yet would have serious consequences for the men to be detained.
Warwickshire County Record Office reference CR173/7 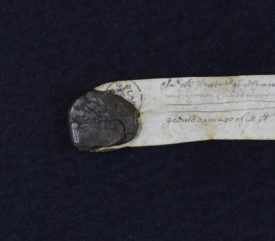 The seal may have some detailing on it, including a cross, but it is very difficult to see.
Warwickshire County Record Office reference CR173/7

The writing is late secretary hand, with the characteristic ‘backward’ e, sloping d and the ye abbreviation for ‘the’.
Warwickshire County Record Office reference CR173/7

Not much is known for certain about this intriguing little document. It sits in a collection of political and administrative papers belonging to the Loveday Family of Arlescote and is simply described in the Warwickshire County Record Office catalogue as ‘A Writ to the Sheriff of Warwickshire’.1 But why is it so small? What purpose did it serve in this truncated form?

In the name of Oliver Cromwell

The slip of paper is appended with a seal (presumably to endorse its authority) and is written in 1657, in the name of Oliver Cromwell; this was towards the end of the Interregnum. It commands the Sheriff of Warwick (who is not named but was George Pudsey, esquire) to seek out and detain Robert Baylies, a butcher, and John Caplewood, a tanner, both from Birmingham.

If found, they are to appear at the Court of Common Bench at Westminster for their crimes against Thomas Willoughby, esquire. These crimes are not detailed in the short document, but they are alleged to have ‘broken the close’2 of Thomas Willoughby ‘with force and arms’, as well as doing him ‘other wrongs’ and causing ‘great damage’ to both Willoughby and the ‘publique peace’.

One of the highest courts in the land

A possible option for the Thomas Willoughby mentioned in our document may have been the Thomas Willoughby referred to as ‘a minor gentleman from Sutton Coldfield’.3 This particular Willoughby had been an active fundraiser for the Civil War effort in Warwickshire, helping to find volunteers in the county and train them as Parliamentarian troops.

Perhaps his attackers had a Royalist cause and Willoughby therefore had every hope of a successful outcome in a Cromwellian justice system!

2 This could mean a parcel of land, which was often described as a close.

This article was Document of the Month for the Warwickshire County Record Office in March 2018. Further articles can be found on their website.

email
More from Arlescote
More from Crime and Civil Disorder