You are here: Home>Locations>Coventry>The Pails Bakery and its Later Years

The Pails Bakery and its Later Years 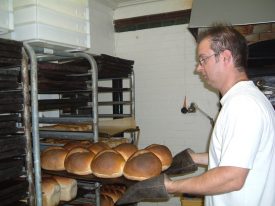 David Pails in the bakers.
Image supplied by Doris Pails. 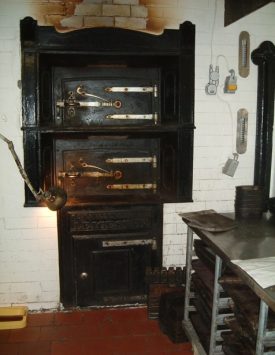 The oven within the bakery.
Image supplied by Doris Pails

I have previously discussed the history of our family bakery up until the end of the 1950s. Here, I would like to conclude its story.

David Hugh Pails, born in 1963 was the fourth and last generation to run the bakery with the help of a small staff. As before with other generations, he too was apprenticed to his father and became a Freeman of the City.

In the 1970s there were ‘bread strikes’. All the ‘plant’ bakeries (large mechanised bread factories) went on strike and it was left to small family bakeries to try to supply everyone with bread. Suddenly we became very popular with folks turning up that we hadn’t seen for years! We just could not cope with the demand but made sure that our regular customers received what they always had and then rationed everyone else to one loaf each. We had to close several times a day until the next lot of bread came out of the ovens. People didn’t understand that we were limited by the size of the ovens as to how much bread we could bake at a time.

It was after this that the supermarkets installed in-store bakeries and it was easier for people to pick up their bread with their weekly shop than to go to the local bakery. As with most local shops, bakeries started to disappear.

As well as the bakery we had a shop in Winsford Avenue, Allesley Park for 35 years but after the untimely death of Hugh in 1996, it was decided to close this shop and concentrate all of the business from Craven Street.

Sadly as the years moved on, a lot of trade disappeared due to the closing of local factories. The Standard Motor Company, Renold Chain Company and the Alvis works closed, and two large supermarkets opened in the area. This all, unsurprisingly, had an effect on local family traders.

Much to our surprise the local TV cameraman appeared the week before we closed, so we had our moment of fame on BBC ‘Midlands Today’ news!

Sadly on August 1st 2008 we closed the business after 110 years trading.

In March 2011 the bakery was sold at auction after the initial buyer backed out of the sale. It is now 2015 and the premises have been allowed to deteriorate and the parking area filled with rubble. Planning permission has now been given to demolish the premises and build three apartments on the site.

A very sad end to a historic building in a Conservation area.