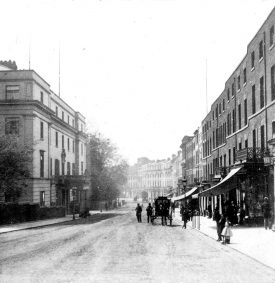 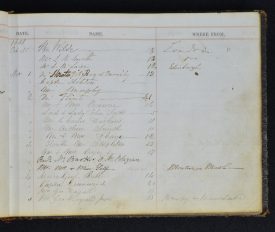 This document records the visit of Charles Dickens to the Regent Hotel in 1858, as part of a reading tour. There is nothing particularly significant about the entry, Dickens sits among the other guests of the hotel at the time, this document is a record of the great author going about his everyday life.

Leamington in Dombey and Son

Dickens had visited Leamington previously, and indeed the town featured in many scenes within his novel Dombey and Son. Among them is the following excerpt.

The Major continued all day: so that when evening came on, and found them trotting through the green and leafy road near Leamington, the Major’s voice, what with talking and eating and chuckling and choking, appeared to be in the box under the rumble, or in some neighbouring hay-stack.

2012 is the 200th anniversary of Charles Dickens’s birth, an event of great significance as to many, he holds a cultural status second only to Shakespeare in the literary canon. His popularity, then as now, stemmed from his ability to straddle cultural boundaries. Although books like Dombey and Son now hold a place in the literary canon, Dickens serialised his novels, making them accessible to a general readership.

The entry in the visitor’s book for the Regent Hotel helps us sate our desire to know the reality behind the legend. Here, we see a tantalising peek into the background of Dickens the man, and the success of Dickens the persona went some way to popularising his novels. Dickens was visiting Leamington as part of an authorial tour, and the lecture circuit was one way in which authors built up a persona and increased awareness of their work.

Further background to the Regent Hotel can be found here.

Linkedin
More from Leamington Spa
More from Writers and Authors