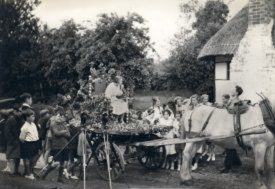 Ronald Gardner (on the right) directing the film This England (1935) in Welford on Avon, Warwickshire.
Photo courtesy of Peter Gardner 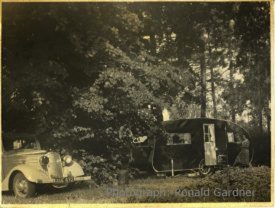 Ronald Gardner’s home-built caravan which the family lived in from 1940-1954.
Photo courtesy of Peter Gardner 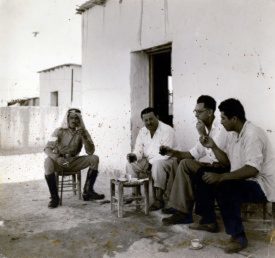 Ronald had previously worked as an agricultural labourer during World War One.

As an electrical engineer Ronald was always interested in amateur cinematography and in 1935 produced and directed a film titled This England. It was a 16mm film (in both black and white and colour) set in the small Warwickshire village of Welford on Avon and depicted the celebration of the May Queen. The preparations of the queen on the day before the celebration of the crowning were shot in black and white and on the actual day the film broke into full colour. It was shown at the Edinburgh Film Festival where it was voted the best amateur film.

By 1939 Ronald and Dorothy had moved to 120 Warwick Road, Kenilworth and Ronald was listed as a Master decorator in the Register.  Their son, Peter, was born in April 1940 and shortly afterwards they went to live in a caravan which Ronald had built from scratch and parked up in Thickthorn Woods near Kenilworth.  He probably did this to get away from any stray bombs which might have fallen on Kenilworth; from July 1940 there were sporadic air raids on Coventry and on the 21st November a landmine was dropped on Abbey End, Kenilworth, destroying houses and shops and killing 26 people.

Ronald continued with his amateur film making until the war came, when he joined a factory, Rotol Aircraft propeller manufacturers, in Gloucester, who equipped many Second World War aircraft.  He was given the job of making film records of various technical processes.  In 1942 he moved the caravan to a farm at Tewksesbury, to be nearer his work in Gloucester.

In 1945 he was approached by Arthur Elton of The Film Centre and later transferred to The Shell Film Unit.  He moved the caravan again, this time to Potten End near Berkhamstead to be nearer to his office at Shell House in London.

He made many documentary films for Shell, including Limestone in Nature (1946), and in 1948 the safety films Dressed for the Part, Starting from Scratch and  Alert.  Other films included Penicillin in Medical Practice for the Central Office of Information and one about The Royal Agricultural Show at Stoneleigh.  He made many more films for Shell when they sent him to live and work in Greece.

Working for the United Nations

In 1952 he moved to Beirut in the Lebanon where he made films for UNESCO and UNRWA.  His main work was setting up and managing a film unit to record the work of UNRWA in refugee camps, and subsequently the training of Palestinians to make films. He lived in Lebanon for 6 or 7 years and had a flat in old Beirut.  His boss at UNRWA was Miss Myrtle Winter and one of the films he directed was Beneath the Bells of Bethlehem.

Ronald’s wife and son remained in England, moving to a cottage in Binley, near Andover, in 1954.  His wife only made one trip to Lebanon but his son, Peter, travelled out to visit him in the school holidays. At the end of Ronald’s stay he and Peter drove back overland to the UK in his car with Arabic number plates.

Ronald and Dorothy enjoyed camping and caravanning most of their lives. After he retired he volunteered as a warden for the Caravan Club and looked after various sites for them. Ronald died in March 1974 in Welshpool Hospital, Powis.  Dorothy lived until 1995 and they are both buried at Llanfair Caereinion cemetery in Welshpool.