You are here: Home>Locations>Kenilworth>August Schneider: Life After the First World War 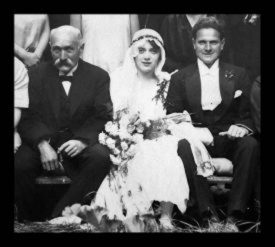 August and Thea's marriage, Frankfurt 1926. on the left is August's father, Louie.
Photo courtesy of the Schneider Family 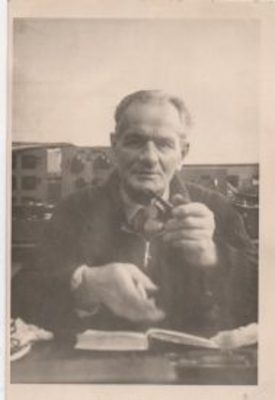 August Schneider, about 1959, at the G.E.C. Test Laboratory, Coventry.
Photo courtesy of the Schneider family

After his role in the First World War, August Schneider returned to Kenilworth.

Life continued to be difficult for the family in Kenilworth after the war and in May 1922 Louis Schneider put his house, 1 Borrowell Terrace, and belongings up for auction.  Except for August’s sister Julia, the family moved back to Germany and lived in a very large house with lots of land.  Julia remained in Kenilworth as she had married a local lad who had served in the war.  August’s mother Emilie died in Carlsberg on 3rd August 1923, and he at this time was referred to as a gardener.

August was married in Frankfurt, Germany, on 31st July 1926 to Theodora Klara Garenfeld (known as Thea) and they lived in a newly converted house in the village of Carlsberg in the Pfalz region, Germany. August’s intention was to run a chicken farm, but it proved unsuccessful and he found it difficult to make a living, not having been trained in any profession other than agriculture.

The family had lost most of their money in the financial crash of the late 1920s.  August eventually obtained a job as a clerk in the labour exchange in a nearby town for several years and they supplemented their income by running their large house as a guest house for summer holiday visitors.  August and Thea had one child named Erika (who anglicised the spelling to Erica when she came to England) born in Frankfurt-am-Main in January 1928.

During the Second World War August and his father Louis, as English passport holders, were again viewed with suspicion, just as they had been in England during the First World War because of their German heritage, and August was taken away in the night on several occasions, but he always returned.

A return to Kenilworth

After the war August decided it would be better to build a new life by returning to England so he and daughter Erika returned to Kenilworth in 1947 followed by his wife, Thea, two years later.  During those two years they had hoped to sell their property in Germany but in the aftermath of the war and the devaluation of the currency by 90% it proved impossible, so the property was let and eventually sold in 1955 and even then, sadly, at only a fraction of its real value.  August, however, was simply happy to be back in England. He obtained a job at the G.E.C. as a laboratory assistant testing electrical equipment and purchased a property in Kingsway, Coventry.

The house in Kingsway only had a very small back garden but August’s grand–daughter clearly remembers him keeping the lawn in pristine condition. She was never allowed to walk on it and August would sit for hours cutting the grass by hand.  She also remembers him making toast on the open fire in the dining room.  He still had his musical talents, playing the piccolo and trying to show his grand–daughter how to play it.

Map marker in the right place? If not, please correct the map.
Locations
Kenilworth (524)
Warwickshire unspecified or out of county (177)
Subjects
Trade and Tradespeople (General) (89)
World War One (97)
Author
Sue Tall
Date