You are here: Home>Locations>Kenilworth>Presenting a Chicken as Evidence, in Kenilworth

Presenting a Chicken as Evidence, in Kenilworth 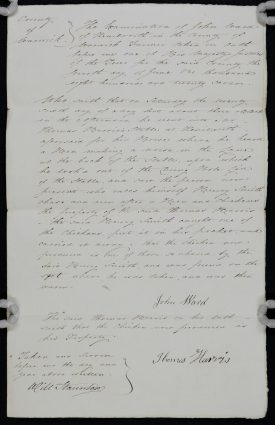 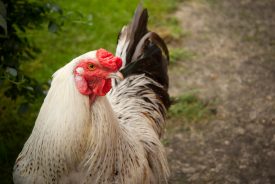 Henry Smith of Kenilworth was accused, in 1827, of stealing a chicken. Ultimately, for this crime, he received a sentence of two months hard labour – not a small amount. The deposition (or witness statement) papers at Warwickshire County Record Office show a slightly unusual curve to the everyday proceedings however, as the chicken itself was produced as evidence.

When Warwickshire Bytes archivist Sharon Forman took a slot on BBC  Coventry and Warwickshire with Vic Minett to promote the project, their sports reporter Mikey Burrows, kindly  recorded the deposition. If you want to listen to it, do please do so!

The Examination of John Ward of Kenilworth, Farmer, who saith that on Saturday 26th day of May last, about three o’clock in the afternoon, he went into Mr Thomas Harris’s stable at Kenilworth for his horse, where he heard a Hen making a noise in the Lane at the back of the stables, upon which he look’d out of the Dung Hole Lid of the stable and saw the person now present who calls himself Henry Smith, chase and run after a Hen and chickens the property of the said Thomas Harris – the said Henry Smith caught one of the chickens, put it in his pocket and carried it away. That the chicken now produced is one of those so chased by the said Henry Smith and was found on the spot where he was taken, and was then warm.

The said Thomas Harris on his oath saith that the chicken now produced is his Property.