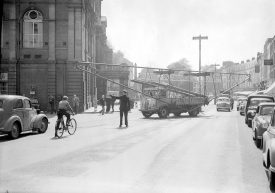 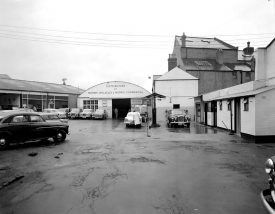 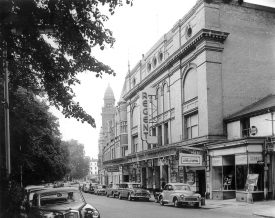 The 1950s brought about some changes for the burgeoning Regent Garage business in Leamington. More space was needed to accommodate both cars for sale and for repair and maintenance. The new building, which housed the repair depot and spares store, was designed by Basil Spence and Partners of Edinburgh (who were also the architects for the new Coventry Cathedral).

On Wednesday 24th April 1957, a rather small lorry driven by 45 year old Jack Lamb of Coventry, delivered a 70 foot long tubular roof truss to the garage. On turning into the yard, the truss only just cleared the shops either side! The truss, which was made by Ludwell & Co Ltd of Pandex Works, Queensway Trading Estate in Leamington, weighed over 11 cwt and cost £125. In total, 450 feet of steel tubing was used for the new building which measured 70 feet by 115 feet.

The garage was officially opened by Mayor Councillor Eric Lucas on 30th December 1957. The following year, Stanley Wood, who had started working at the Regent Garage in 1921 and became the general manager in 1932, retired and was succeeded by Jack Green.

More space was needed for guest cars and, in 1961, the hotel’s garden was converted into a car park. In November 1962, the garage took over Moss’s Agencies Ltd, and the Regent Garage became the sole distributors for cars from the Nuffield Organisation wing of the British Motor Corporation (BMC) (Morris, Wolseley, MG and Riley) as well as Morris commercial vehicles.

The garage celebrated its Golden Jubilee in 1963 and displayed a 1913 bull nose Morris, on loan from Coventry Transport Museum. By this time, the garage’s staff had more than doubled… and more room was needed!

The Theatre Royal, where acts such as Houdini once performed, closed for business in 1934 and re-opened as a cinema ten months later: where once (apparently) an elephant had fallen through the stage, the Wurlitzer now appeared1. The first film shown was ‘The Gay Divorce’ in 1935.

By the early 1960s, however, film shows had given way to bingo and wrestling. In November 1964, the Stratford on Avon Picture House Co. Ltd declined to renew their lease and left the corporation with half a cinema on their hands, half of the site already being owned or leased by the Regent Garage. The decision was made in March 1965 to pull the cinema down completely.

In December, however, construction work began to change the cinema into a modern motor workshop for the Regent Garage – an entrance was constructed from the covered garage over the stage into the stalls. 400 tons of hard core was dropped into the stalls to level them to provide a service workshop for cars. Electric lifts were installed for repairs and servicing private cars; the dress circle became a store for car body parts.

The original workshops became reserved for commercial work only, as these types of vehicles serviced needed more space for manoeuvrability.

1 According to Alf White, one of the theatre’s scene-shifters, ‘Houdini jumped into a huge glass bath of water, hand-cuffed, but he was out in a trice’. Leamington Spa Courier, 5 February 1965.