You are here: Home>Locations>Leamington Spa>The Regent Garage: The Early Years

The Regent Garage: The Early Years 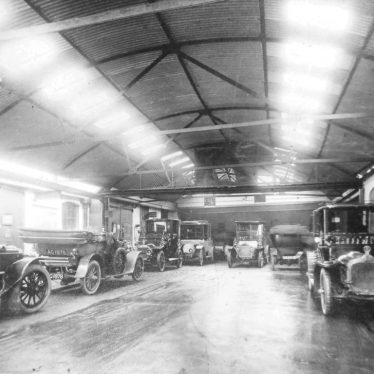 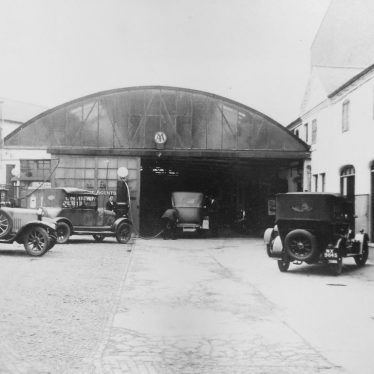 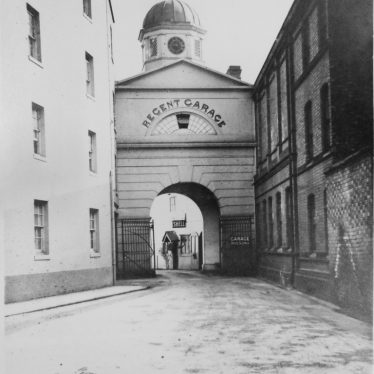 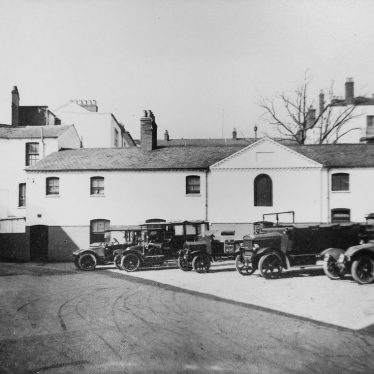 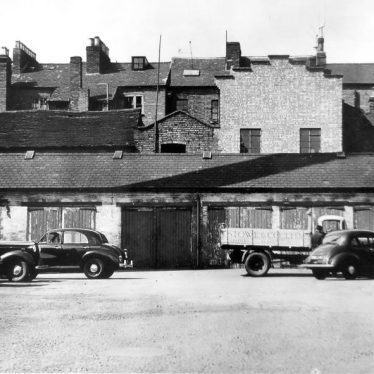 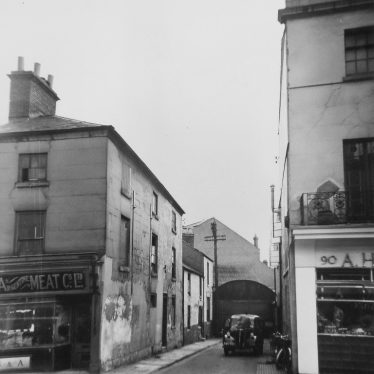 The Regent Mews were originally built as stabling for the guests of John William’s Bedford Hotel – purposefully built opposite, rather than next to, the hotel. The mews provided stabling for 74 horses, coach houses for 44 carriages, nine saddle rooms, a tap, lodge, and coach master’s residence. When Williams later expanded his business and opened the Regent Hotel next door to the mews in 1819, he gave up the Bedford Hotel. The mews and hotel, however, were not run together for long – in November 1874, Williams sold the Regent Mews on to Lyas Bishop.

The turn of the century saw an increasing decline of the horse as a means of transport in favour of the motor car. In 1909, one hundred cars were accommodated at the mews during the RAC’s 5th Provincial Dinner, presided over by Prince Alexander of Teck. The same year saw John Perkin’s lease of the mews end; the hotel took the area back in hand and gradually began developments to accommodate motor vehicles.

Sale of the first car

In 1913, the garage sold its first new car, a ‘bull nose’ Morris. The garage also hired out motor cars including a Charron, Renault, Maxwell and Mercedes, along with an omnibus to go to the station By 1914, they’d added a 12hp Sizaire Naudin, a West-Aster and a Brasier “Charabang”.1

Just as sales of cars had taken off, the First World War began and very few cars were sold by the garage during the war years, though 1915 did see the installation of the first hand wound petrol pumps.

In the early 1920s, the garage had for hire a number of Renaults, namely a Docker, Cabriolet, Landaulette and a second hand Limousine2; they also hired out a Charabanc and an Albion Lorry. At this point, the hire of cars produced almost double the profit of car sales. By 1925, the garage had 14/40 HP and 20/60 HP Sunbeam Touring cars for sale along with Morris Oxfords and several Morris Cowleys, both new and second hand.

The Regent Garage opened a show room at 132 Parade in 1932. Alterations to the premises cost around £680, and an extra £277 was spent on fixtures and fittings. The garage sold Morris and Wolseley cars, along with commercial and second hand vehicles; by the end of the 1930s, substantial profits were being made on the sale of cars. Vehicles for hire now included a Daimler Landaulette, Morris Charabanc, an Austin Landaulette and a Lancia Charabanc. A Goliath Truck and a Renault Lorry were also available for hire.

All was not, however, good news: disaster struck in June 1934, when two young steeplejacks working on the Regent Hotel’s chimney were killed when the chimney and scaffolding collapsed into the yard of the garage.3

Leamington, though largely unscathed by enemy bomb action, was hit on the 14th November 1940 and the archway leading to the garage was destroyed along with several of the old Daimler hire cars.

The hotel and garage were de-requisitioned in 1946, though the show room only reopened in 1948. Its life was short lived and it was sold in 1957 – more room was needed!

1 Editor’s note. This is how it is written down in the original document (Warwickshire County Record Office reference CR4014/86). It is not clear whether this is a misspelling of charabanc, or the name of the car. Can anybody help?